Richard Robinson sponsored Dr Asatryan in this work in memory of his mother who had taught him the names of many English wild flowers even before he started school. Richard's mother died shortly before he and his wife Vicky travelled to Armenia as members of the MPG's field trip in June 2015.
IN SEARCH OF POPULATIONS OF Dianthus grossheimii
18 JULY - 15 AUGUST 2015
The areas visited are not far from Gavar town on the northern slope of the vast Geghama Mountain range which stretches to the south-west of Sevan Lake and the western part of the Vardenis Mountain range around Selim Pass down to Caravansaray.
The routes were planned in order to study subalpine meadows with the focus on populations of narrow endemic Dianthus grossheimii.

Dr Anna Asatryan
As always happens in Armenia, every trip brings many other interesting finds and so during our expeditions we had even more exciting finds than the target species. We found two small populations of Grossheimia ahverdovii.
The original data collected in the field and from literary sources have been put in a paper in English which I have submitted for publication in the botanical magazine Takhtajania of the Institute of Botany of NASRA and Armenian Botanical Society. The next volume will be published soon and I will provide you the link to online version once it is available.
Three populations of another beautiful Caucasian species Dianthus caucaseus were found and investigated. D. caucaseus is taxonomically close to D. grossheimii. It is found only in Caucasus and Kars (NE Anatolia). We studied and described three populations of this species on the northern slope of  Geghama Mountain.
We have described five meadows in different parts of the area visited, we collected herbarium and made lists of the species for each of the sites. Special attention was paid to the populations of target rare Dianthus grossheimii and newly discovered Grossheimia ahverdovii.
Below are descriptions of the most remarkable sites visited on the fieldtrips
Sourb Khach mountain.
The site of particular interest is a small mountain, 2500m above sea level, with Sourb Khach church on it. The mountain has rather steep slopes (about 40-45 degrees) and a crater area of about 400m in diameter. The north-western slope is covered with subalpine meadow with a total area of about 2 hectares. There are a number of beautiful and comparatively rare representatives of Armenian flora such as Aconitum anthorra (density: 2-3 plants in 100 m2), Dracocephalum ruyschiana (3-5 plants in 100 m2) , Dianthus caucaseus (7-15 plants in 100 m2), Vicia cracca (15-25 plants in 100 m2) . The slopes are grazed at the lower altitudes (up to 2300m) and the only potential threat to the meadow may be recreation as the church is a popular pilgrimage site for locals

Soub Khach
List of species recorded in this habitat:
Grossheimia ahverdovii
The most fascinating finding of the trip was a very rare species Grossheimia ahverdovii, previously known only by two herbarium specimens, one in Yerevan and one in Tbilisi. This used to be called Centaurea ahverdovii but the genus Centaurea (cornflowers) which was composed of hundreds of species has been split into several genera. It was collected in Armenia the first time in 1946 on Arailer Mountain and again in 1968 in the Ukhtupar Mountains.  There is no data from these two populations. There is a reference to a third location of G. ahverdovii near Gorelovka village in the Akhalkalaki region of Georgia (collected in 1930). G. ahverdovii is a very rare, beautiful plant, endemic of Transcaucasia. There were only a very small number of plants in these new found populations - about 150 in total - growing in the pastoral area. The species needs to be included in the Red Data Book of Armenia. G. ahverdovii is recorded for the first time for Sevan floristic region.
Species found in this habitat were:
Dianthus grossheimii
Two populations of Armenian endemic Dianthus grossheimii have been found and studied.
The first was located on the top area of Selim Pass (about 2200 -2250m above sea level) in a hay meadow. Where the grass was already cut we studied the fragments on the territory, where the grass was not cut D.grossheimii  was found in bloom over a total area of about 2 hectares with an average density of about 3-5 specimens on 100m2.

The other population by the Caravansaray was found on pastoral area, which was overgrazed with signs of soil erosion.
The plants growing there were:
Achillea biebersteinii
A.millefolium
Arthemisia absinthium
Astragalus aureus
Carthamus sp.
Cirsium sp.
Convolvulus arvensis
Helichrysum armenum
Trifolium arvensis
Verbascum sp. 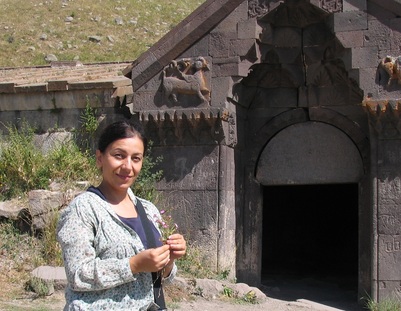 The results:
We collected valuable herbarium specimens, photographs, specific data on the target species populations and the
habitats to be used in further research/conservation, particularly in my Doctor of Sciences thesis, a paper submitted for publication.

I express my gratitude to Mr Richard I. Robinson and Mrs Vicky M. Robinson (UK) for financial support of the fieldwork and to Mediterranean Plants and Gardens (MPG) under the auspices of which the contact between us was established.

I want to say thanks to Kristina Ananyan for her assistance during the fieldwork and Marat Shahbekyan for technical support and bringing us to the places of interest.

All the accountancy and financial reports are done by the implementing organisation “Nature Rights Protection” NGO in accordance with Armenian state laws and tax regulations.

Anna Asatryan
back to the top
​© Mediterranean Plants and Gardens