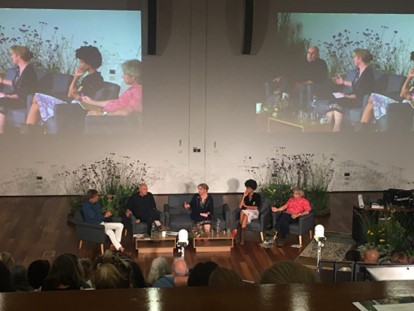 The Beth Chatto Symposium 2022 brought together eminent speakers from across the horticultural sector. Entitled ‘Rewilding the Mind’ the two-day event included a combination of presentations and panel discussions as well as an evening visit to Beth Chatto’s Garden. The symposium has given me great inspiration and ideas applicable to my role as gardener at a leading hotel in Falmouth, Cornwall.

Speakers referenced in this report

Links to projects listed at end

Gardens have the potential to provide ecologically sound and biodiverse habitats in even the most unlikely sites and neglected spaces. In order to achieve this, a site-specific approach to garden design and management is required as well as patience and observation over an extended period of time, particularly in new gardens (Pearson).

Whilst the scale and situation of the gardens presented vary considerably, a key message was that a cohesive approach is required with a long-term view from initial planning stage. This integrated response requires input from policymakers, town planners, designers, horticulturists, ecologists, landscapers and the community who will use the space. In particular, ecology and horticulture should not be treated as distinct disciplines but should work together as they are intrinsically linked (Garrett) and habitat creation should be considered at design stage. Rewilding should not be target driven but process based.

Rewilding can occur in the most unlikely places; in fact, some of the most biodiverse sites may appear, at first glance, barren wastelands. One example of this was Canvey Wick in Essex which has the third highest number of recorded invertebrate species in the UK (Little).

In separate projects, Little and Price transformed desolate car parks into inviting gardens teeming with wildlife. Little maintained the appearance of the parking spaces to emphasise their repurposing as “garden bays” at the Langdon Visitor Centre whilst Price transported hospital patients at Maggie’s Southampton into a safe and inviting haven through clever use of screening and planting.

Experimentation with alternative growing media including recycled materials was explored by several speakers. Drawing on influences from Peter Korn’s talk at the previous symposium, Price adopted his method of using sand as the sole growing medium in her personal garden. Initially a stark desert, the space has since become a biodiverse garden proving how the right plants will thrive in uncompromising conditions. Similarly, in the redesign of the Walled Garden at Knepp, a “patchwork” of media was used to create a 200mm layer for planting which included crushed concrete from buildings demolished on site (Stuart-Smith).

Whilst the projects Alistair Driver of Rewilding Britain assists with tend to be over 250 acres, rewilding is also feasible on a small scale and he encouraged us to look beyond the garden perimeter and, for example, consider diversifying use of buffer strips on surrounding land to create more ecologically sound environments.

Within the confines of an existing garden, Garrett encouraged us to see the potential of every nook and cranny whether it be porous walls, bare ground or niches which offer refuge to a variety of insects and dead wooden posts which support detritivores.

A complex mosaic of layered planting may create a biodiverse landscape, however, a shift in attitude is required as it would be very different from a traditionally neat garden. There was an awareness that wildness can seem untidy and intimidating. This can be overcome by creating negative space, for example, a pathway through meadows which also encourages movement and exploration (Price). Similarly, by including dwell spaces such as the lawn at the Hepworth Wakefield, the public are invited to congregate and linger in a safe space (Stuart-Smith). In contrast, at Great Dixter, previously manicured lawns are mown less regularly with the results seen as charming by some, and messy by others. We were encouraged to embrace an element of chaos within the garden for the net gain in biodiversity (Garrett).

Further, a dead or dying tree might typically be removed from a garden for aesthetic reasons, however, as it might support wildlife, Price suggested introducing plants such as climbing species of Lonicera or Rosa to cloak it rather than remove it.

The concept of pocket forests was explored by a few speakers. Price enthused about making trees the protagonist of a design and, rather than introduce man-made sculptures into a garden, we should celebrate the sculptural form of trees such as a multi-stemmed Amelanchier lamarckii.

Stuart-Smith’s design for the Paradise Garden at RHS Bridgewater includes ten species per square metre with each third dedicated to different geographic regions: American, Asiatic and Mediterranean. In contrast, Guzzon’s advice was to avoid producing complicated planting schemes in favour of easier long-term maintenance. He also advocated allowing plants to seed freely with minimal interference to help the garden evolve rather than keep rigidly to a static planting plan.

The topography of a site is a key consideration and at Knepp Castle’s Walled Garden complex topography is achieved through peaks and troughs up to 1.5 metres above and below original ground level. This has created a variety of habitats which supports ecological richness (Stuart-Smith). Beth Chatto’s garden is another key example where significant height differentials between the five areas of the garden create strongly contrasting microclimates; each with its own profile presenting opportunities and limitations.

A key theme which recurred in most of the discussions was that of the importance of engaging with the public and education. For spaces to be successful they should reflect the needs and desires of the surrounding community which can help build a shared sense of ownership. A good example of this was given by Little who looks after a productive garden at Clapton Park Estate. Following feedback from the local Turkish community he introduced grapevines so that the leaves can be used in traditional dishes.

In order to achieve a level of engagement, it is important not to prescribe how a space is used. At RHS Bridgewater there are multiple routes through the garden which increases the number of ways a space can be experienced. We were advised not to mediate but to trust our audience and create tension between chaos and order (Stuart-Smith). At Chatsworth House, the recently redesigned Rock Garden encourages play and exploration, with no straight pathways, and obstacles made from natural materials that have been positioned so that visitors need to duck and weave their way through the space.

Similarly, at Elephant Park in Southwark, London, the designers had a similar intention. A 500-metre space with a series of small cascading waterfalls, there is an element of risk and problem solving for visitors. Use of natural materials including stone, sand and water create an informal, tactile environment with no fences or walls so that the park appears to be part of the wider landscape: a far cry from the typical municipal playground. In contrast, ceramic screening at Maggie’s Southampton created intriguing glimpses of the garden within and encouraged visitors to explore.

Educating the gardeners who look after the garden, both professional and voluntary, is key to its long-term success. Broadening the team’s horticultural knowledge will build confidence and enable them to work autonomously; for example, the ability to differentiate between those plants which could be left to self-seed and those which are considered to be weeds and should be removed (Price). At the Hepworth Wakefield, Katy Merrington’s title as cultural gardener symbolises a positive shift which acknowledges the gardener’s role in steering the garden forward beyond the initial design and installation.

The two-day symposium was a great source of inspiration with several approaches and ideas which I intend to incorporate in my own work. Practical steps toward more sustainable horticulture were suggested by many speakers with the aim of reducing strain on resources. These included:

Not irrigating beds apart from new plantings
Obtain water butts to conserve rainwater
Propagate from existing plants on site
When ordering plants, acquire bare root plants delivered in sand to avoid use of pots and compost
Eradicate use of herbicides, pesticides, inorganic fertilisers
Use peat-free compost and source suppliers who don’t use peat

Within the woodland area at the hotel garden, I am considering creating log piles where trees are felled to provide a habitat for vertebrates and invertebrates.

One way to engage with visitors could be to introduce edible crops and herbs into planting schemes or create a display vegetable bed to spark conversation and link with the hotel restaurant.

There is a large, layered Cryptomeria japonica in the garden underplanted with spiky Fascicularia bicolor. I am keen to transplant the F. bicolor to create a safer place for children and adults to play and interact with the plants in the garden. Similarly, adding large natural boulders to climb on and over would offer an alternative playground for guests.

Going forward, a way in which to engage visitors with the subtropical collection would be to offer regular garden tours to share knowledge and encourage people to connect with nature.

Overall, the symposium offered refreshing perspectives and helped me to see opportunity and beauty in the most unlikely places. It also inspired me to research further into the projects and experience of the speakers, as well as those referenced such as Peter Korn, Mien Ruys amongst many others.

I wish to thank Mediterranean Plants and Gardens for their encouragement and
financial support which was kindly provided to enable me to attend this event.