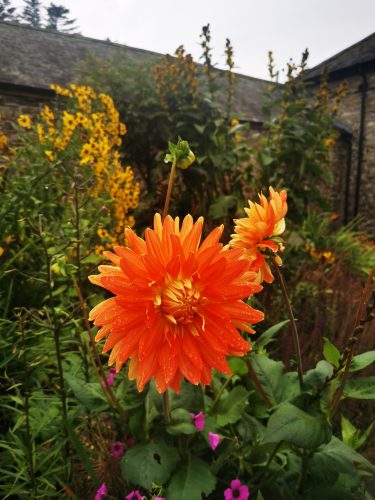 Aberglasney is an impressive historic garden set within the lush, rolling green landscape of Carmarthenshire. Upon arriving we were met by Head Gardener Joseph Atkin who took us through the history of the landscape and gave a guided tour through the garden, highlighting plants of interest in the late summer season.

The garden is laid out so that you move seamlessly from one area into the next. Some of the key areas we looked at were the Walled Garden, Kitchen Garden, Woodland and Bog Garden, Sunken Garden and the small Alpine Garden, which was planted on a slope at the edge of the site.

We started in the Cloister Garden, the most recognisable feature of Aberglasney, which Joseph explained is being considered for future development as a medicinal herb garden, as it would have been used in the 15th century. He noted that many plants used at this time were of Mediterranean origin because of the localised warmer temperatures, including lavender, rosemary, sage, thyme and winter savory. It is currently grass beds, planted up with Crocus vernus ‘Vanguard’, offering an impressive display of colour in early February which helps provide, as Joseph was keen to express, year-round seasonal interest in the garden.

As we moved into the Walled Garden we were met with exuberant borders still full of colour – filled with Foeniculum vulgare ‘Purpureum’ (bronze fennel), several interesting varieties of Pulmonaria cv. (lungwort), Agapanthus, Crocosmia, Eutrochium (Eupatorium) (Joe-Pye weed), and Helianthus decapetalus (thin-leaved sunflower). As well as a Vitis coignetiae (crimson glory vine) growing up the south-east facing wall. The site is punctuated with Taxus baccata (yew) cone topiary which cements the formality of this area but also contrasts with the less formal planting.

It was here that Joseph told us about the importance of bulb planting. The garden has an average of 40,000 bulbs and 24,000 of these are in the walled garden. Due to the clay soil and wet climate, the bulbs rot easily and need to be replaced, therefore each year Joseph and his team add 12,000 bulbs – a mix of tulips, camassias and alliums (he specifically noted Allium ‘Purple Sensation’) – to maintain an impressive seasonal display in spring. 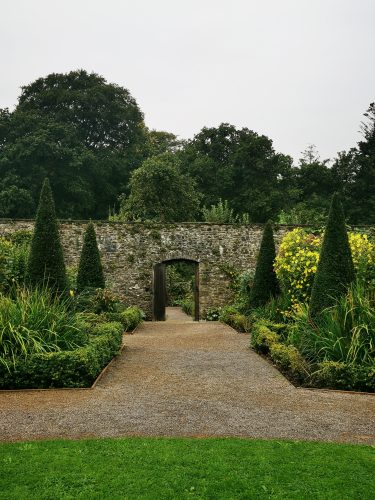 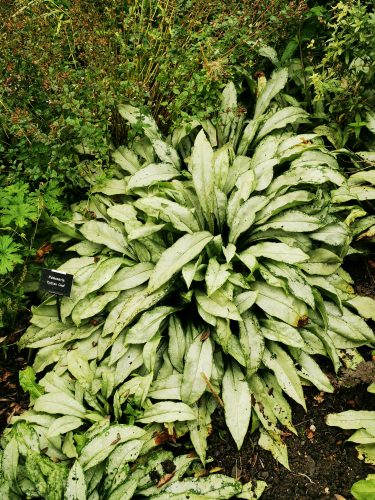 As we moved into the Alpine Garden we were met with a sloping topography with various interesting foliage plants and a mass of Verbena hastata. The borders were still looking full and Pulmonaria ‘Cotton Cool’ was looking particularly good, as well as Actaea simplex cv. which had dense spikes of drooping, fragrant white flowers catching everyone’s attention.

It was here that Joseph told us how he clears away leaf fall in autumn and stores it to create leaf mould, allowing the frost to get into the soil, thus creating unfavourable conditions for slug eggs, and consequently reducing the overall population in the garden. This is one of the reasons the hosta leaves were in such good condition. 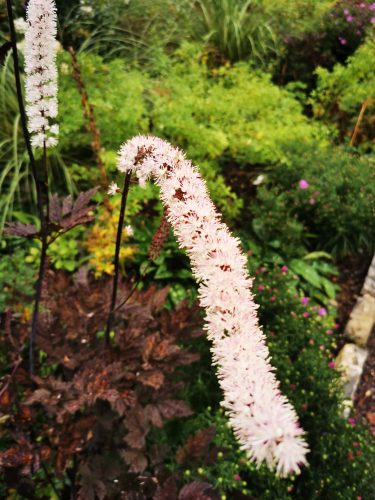 In the Kitchen Garden, Joseph offered some excellent advice on protecting brassicas from pests without covering the crop. He uses a biological insecticide called Dipel which is mixed into a water solution and applied in June or July. It is biodegradable and leaves no residue on the foliage of the plants. Using Dipel instead of constructing frames and cages to cover and protect the crop, frees up time at the start and end of the growing season.

The Kitchen Garden was a riot of colour, even in late summer, with cut flowers mixed with companion planting among the fruit and vegetables, which are laid out in four beds planted out on a rotating basis. The contrast of cavolo nero against white cosmos and Verbena bonariensis was a particular highlight, as well as the Malus sargentii arbour with ornamental gourds growing through the frame, adding extra interest through the season. 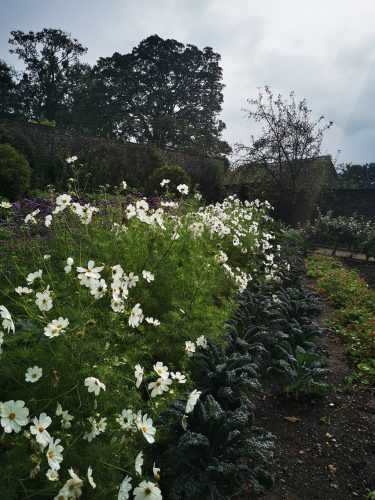 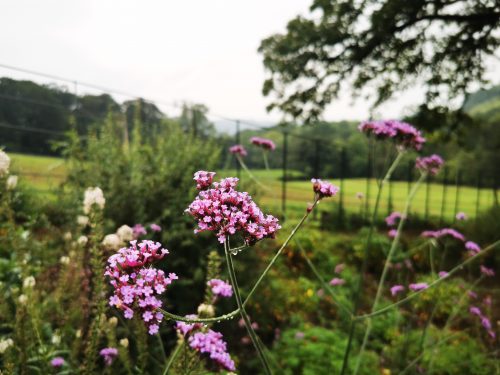 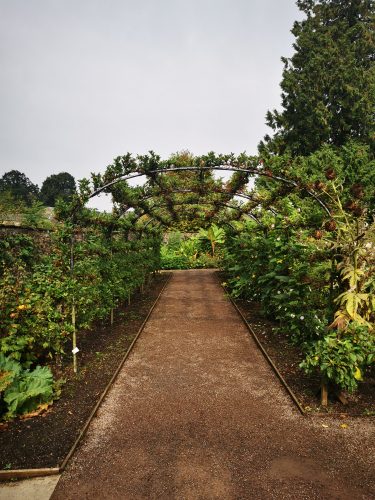 The Sunken Garden was a real hidden feature, a garden within the garden, tucked away at the back, beside the on-site accommodation, down a narrow avenue of colourful herbaceous perennials. It is a peaceful and contemplative space, with a central water feature created by William Pye, which helps to set the tone of the calm and reflective atmosphere here. The tranquillity is punctuated by the vibrant hot colours of the kniphofia, tulips and dahlias. The planting style feels coherent and I particularly enjoyed the use of agapanthus, golden-yellow crocosmia, Salvia dombeyi and the Aesculus pavia ‘Splendens’. 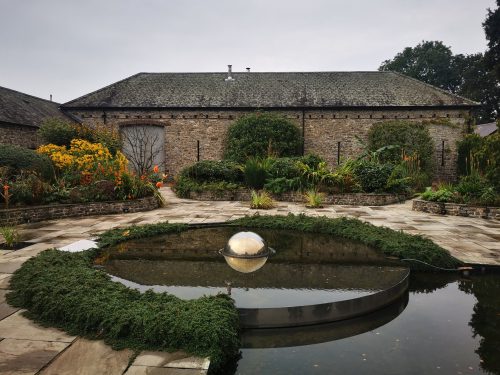 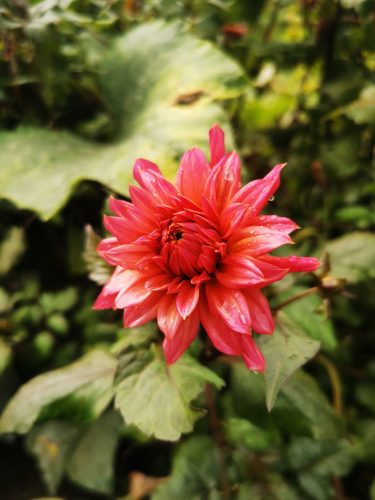 Dahlia cultivar in the Sunken Garden

After Joseph’s tour, I didn’t have much time to explore so I wandered through the woodland area to catch a glance of the Bergenia cyanea (as I’m building a National Collection in Glasgow and wanted to see how they fared in the moist, acid conditions) and cyclamen which were thriving under the conifers. I made my way over to the house to get a quick look at the Ninfarium, a truly impressive display of sub-tropical plants in the ruins of the mansion. I was impressed by the size of the Musa coccinea and Aristolochia gigantea and wished that I had more time to spend in the space. I quickly ran for the bus and we made our way to the National Botanic Garden of Wales.

In the afternoon we travelled to the National Botanic Garden of Wales and met Will Ritchie and two members of his team who gave us an insightful tour of the garden, its history and importance as a national symbol for Wales. He stressed the point that NBGW is a modern botanic garden that has shaped its purpose, mission and design in the 21st century to meet the challenges we face, unlike many historic botanic gardens which have evolved from the physic gardens of old.

The tour included a visit to the Norman Foster glasshouse which houses a diverse range of Mediterranean flora from six regions across the world: California, the Canary Islands, Chile, South Africa and the Mediterranean basin. 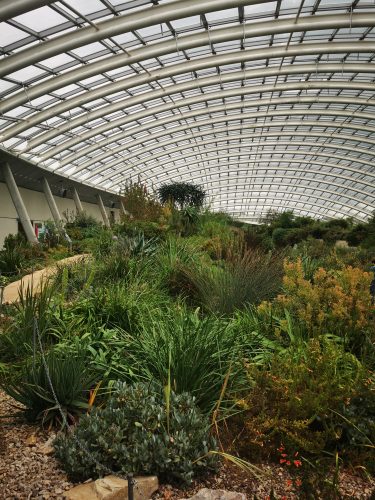 The Great Glasshouse really was the highlight of the trip. The impressive structure, the largest single-span glasshouse in the world, houses the biggest collection of Mediterranean plants in the northern hemisphere. As soon as we started down the path to explore the collections, I felt a great intimacy within the 3500 square metre space. The imaginative use of rocky terraces, gravelled scree slopes and cliffs reflects the natural environment, to meet the needs of the diverse flora in the collection.

In the South African collection, I was drawn to Haemanthus albiflos and Haemanthus coccineus, Aloe aristata, Aloe distans and Gerbera jamesonii. And in the Mediterranean basin, I particularly liked the hybrid Lavandula x christiana (a cross between L. canariensis and L. pinnata native to the Canary Islands and Madeira) with its silvery-green foliage and trident like flower heads. 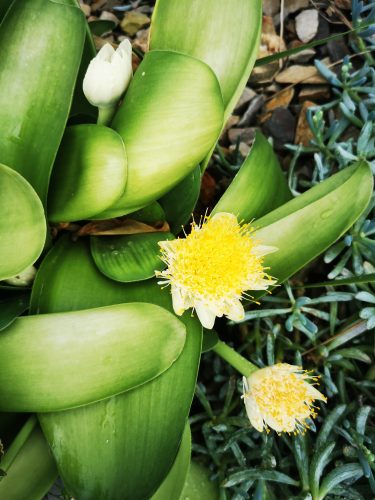 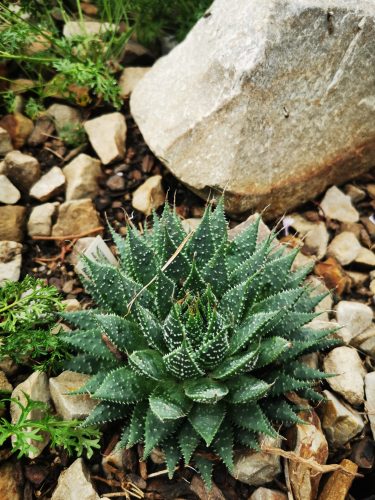 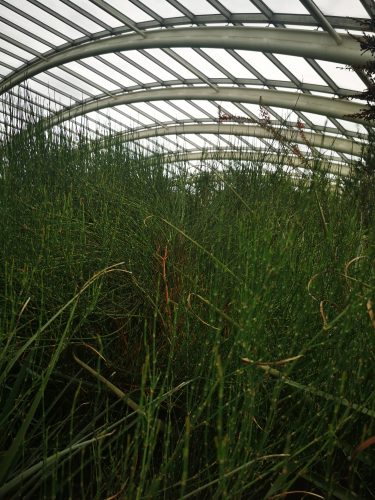 As we climbed up the rocky terraces, I came across large sections filled with Ephedra chilensis which, with its shrubby, scale-like leaves, may not be of much interest to the passer-by but in its dried form the leaves contain a good source of the stimulant ephedrine. This has a long history of being used in herbal medicine to treat colds, fevers, coughs and headaches and is also seen in India and China where local herbalists use other Ephedra species, such as E. sinica, within local herbal preparations.

At the end of the formal tour, the group was kindly offered a look at the glasshouses and a member of the horticultural team took us through the propagation process of many of the plants we had previously found in the Great Glasshouse. It was a real insight into the operation of managing a botanical collection of endangered plants.

In the end I wasn’t feeling well enough to explore much of the site and spent the rest of the time we had left nursing a hot drink with some of the other members in the cafe. I also wasn’t able to visit the three private gardens the following day, so I was grateful to see photos taken by other members of the large collection of bergenia at one garden and a herb garden display at another – two of my main interests.

I would like to express my thanks to MPG who generously supported me with a bursary to cover my travel and accommodation costs for the trip. I would not have been able to experience this wonderful trip without the support and for that I am incredibly grateful. I must also extend my thanks to everyone involved in organising the tour and my fellow participants with whom I got to share some lovely plant geekery moments.

Finally, thanks to Heather Martin who helped me secure a place on the tour and Cathy Rollinson for helping me with the bursary application. 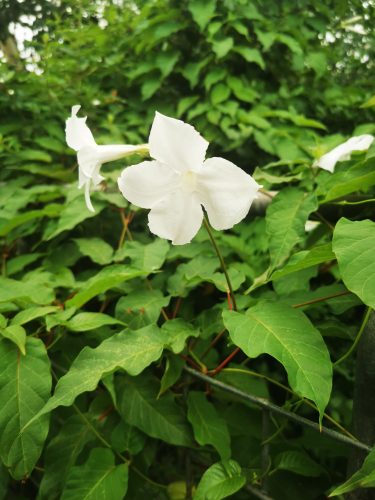