Our tour of six Herefordshire gardens and one in Wales was based at the Chase Hotel, Ross-on-Wye. After attending the AGM on the evening of Sunday 12 July, 50 members of MPG took part in the tour.
A common theme apart from, unfortunately, the inclement weather, was that all the gardens we visited had been either created or restored in the past 10 to 40 years.
Our first visit of the day on Monday 13 July was to Bryan’s Ground, near Presteigne.
The garden is named after the field on which it was originally created in 1911 – 1913 by two sisters, who had inherited the equivalent in today’s money of £2.5 million each from their businessman father. 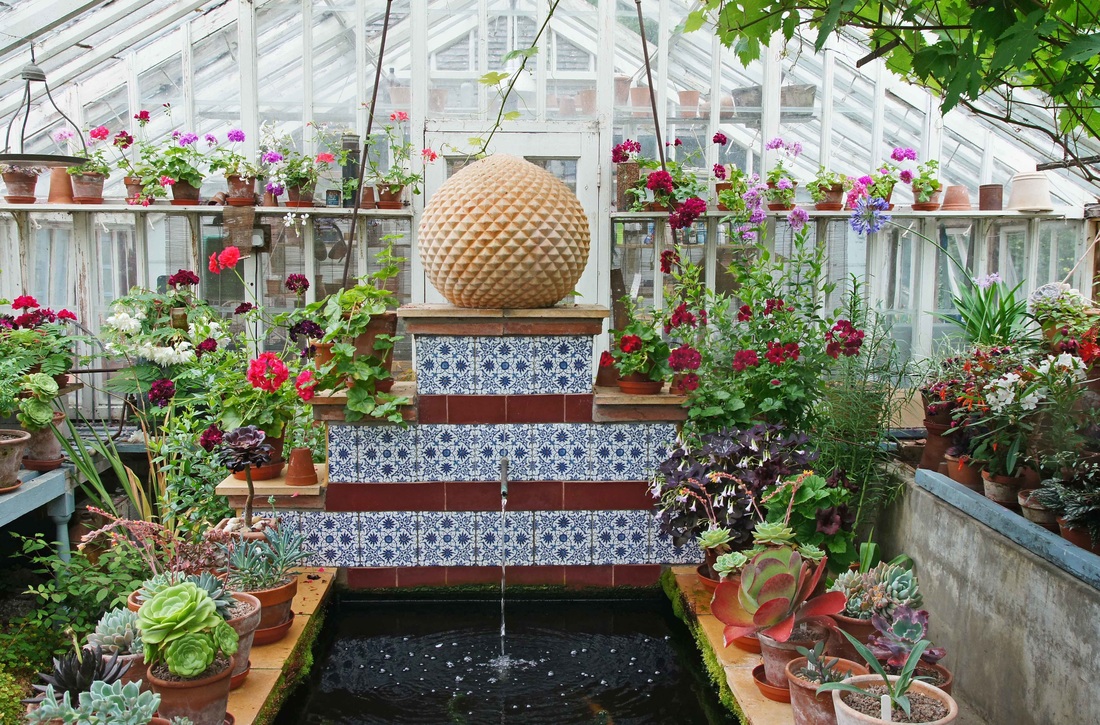 By 1993 when the current owners David Wheeler and Simon Dorrell acquired the garden, it was largely derelict. They have restored the garden by compartmentalising three acres into a series of garden rooms. The overall impression is of formal gardens with romantic, sometimes wild, flowers interspersed with topiary. 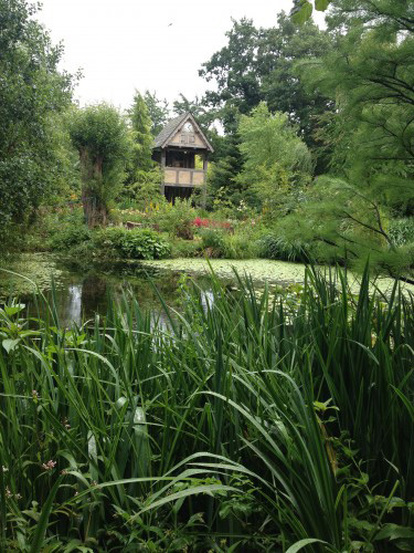 A further five and a half acres consist of an arboretum with 400 trees and shrubs planted since 2000. There are some quirky features: old garden equipment is dotted around and a “Sulking House” provides a wonderful hideaway for someone to work through their bad mood.

In 1969 Richard Pim was working in the Sahara and dreaming of babbling brooks and riverside pastures. He asked a friend in the UK to find him a piece of land to buy with a water meadow, a stream and some sort of building, which his friend duly did. Richard started work on the plot about 15 years ago by restoring the waterwheel and then building a stone tower to mount it on. Various follies were added including a bottle grotto, an African summerhouse and a 25ft oak tower containing a water-powered cuckoo clock, from which a 3ft wooden cuckoo emerges on the hour to call and sing for about two minutes. There was a wide variety of colourful plants, ferns, gunneras and weeping willows, the combination of which was absolutely lovely.

Our final visit of the day was to see the garden at Rhodds Farm, Lyonshall owned by Richard and Cary Goode.
Work on the garden began in 2005 and everything, apart from the mature trees, has been planted since then. There are no solid boundaries so that the garden blends into the landscape beyond to give good views to the surrounding countryside and the Welsh hills. 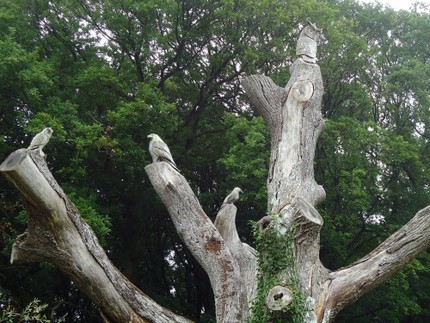 Birds sculpted in a dead oak at Rhodds Farm

In the evening we attended a presentation in our hotel given by Peter Dowle of Howle Hill Nursery. Peter has delivered gold-medal-winning gardens at Chelsea including a gold medal in 2012 for the L’Occitane Immortelle Garden. The Immortelle plant grown in Corsica is the basic ingredient for L’Occitane’s best seller, Divine Cream.

Using the L’Occitane Immortelle Garden as an example, Peter described the process for creating a show garden at Chelsea starting with the very detailed research required to produce a convincing display, even down to the lichen on the steps in the area where the Immortelle plant grows. The next stages of the process include the application to the RHS, press releases, the very complex logistics worked out, and finally the two and a half week construction period. Peter gave a very interesting presentation and provoked many questions.

Our first visit on Tuesday 14 July was to Brockhampton Cottage in the village of the same name.

The owner is Peter Clay, co-director of the online garden centre crocus.co.uk, who had been left the property by his grandfather. The house had fallen into disrepair and has been refurbished. The garden had been suffering from lack of maintenance and was re-created in the late 1990s. It was re-designed by Tom Stuart-Smith, who is still involved. It is not the easiest of plots as it is on a slope and the soil is Herefordshire sand, going down 18 inches before hitting rock. On the southern side of the house mown paths through flower meadows on a huge long slope lead down to a man-made lake and act as a connection between the house, the lake with its swans and the view beyond. Around the house are terraced areas some with more formal planting, others with foliage-rich cottage garden flowers. 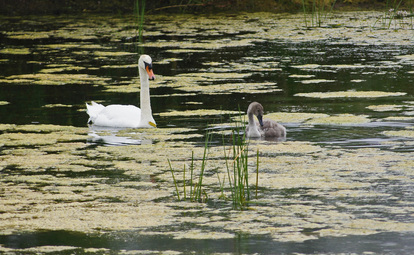 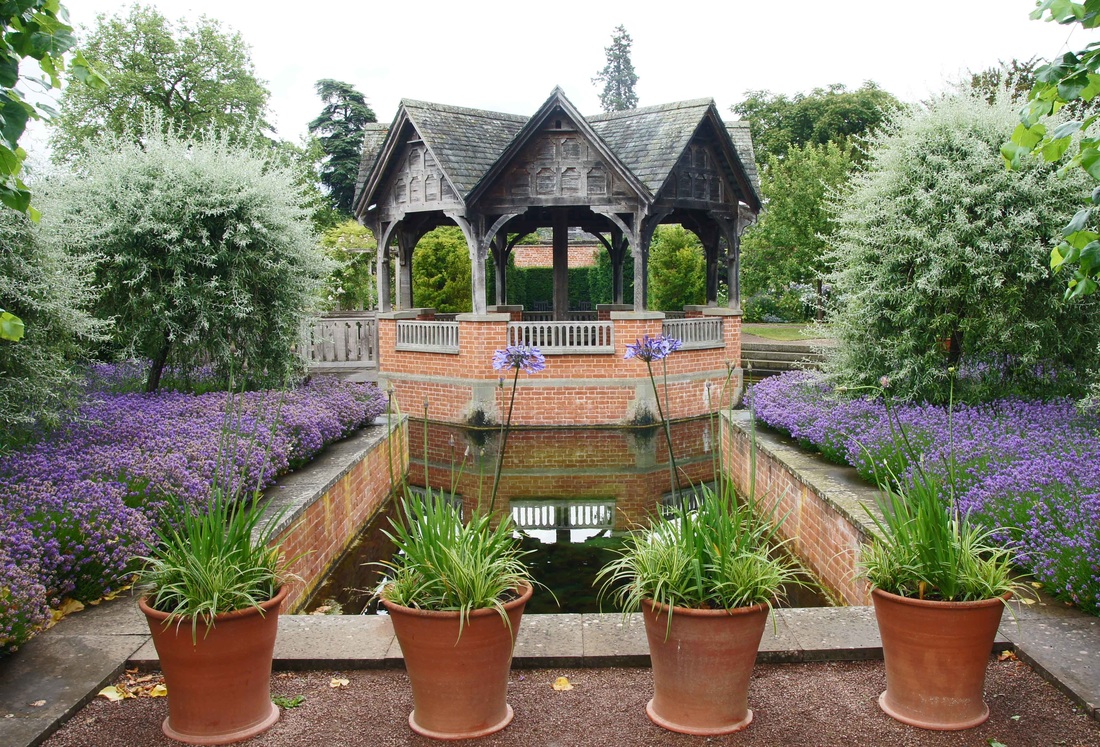 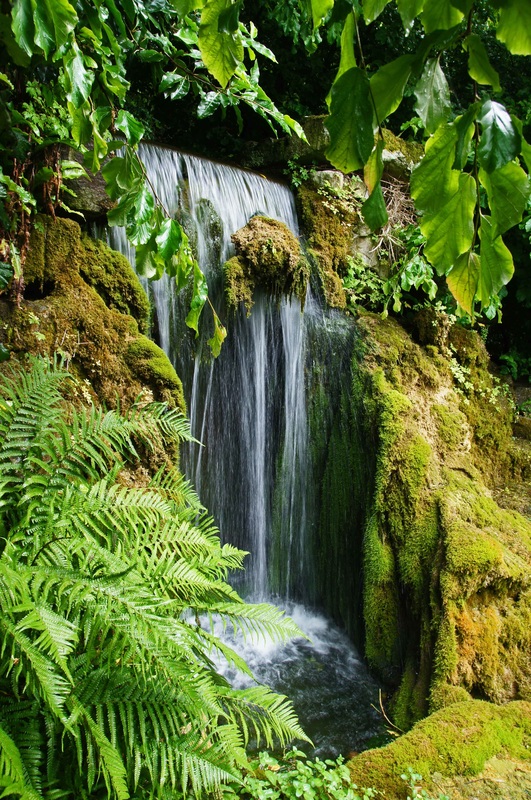 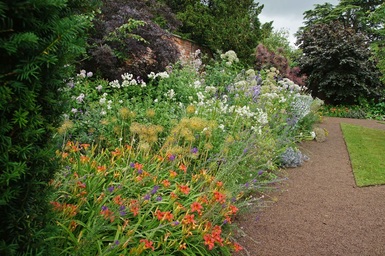 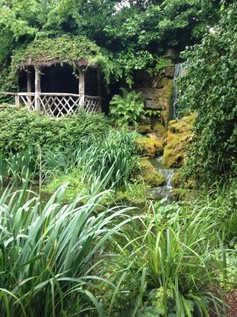 Secondly, we went to Hampton Court Castle Gardens, near Leominster.

We were shown around by Jill, a part-time volunteer gardener and house guide. In the 1990s the property had been on the market for the eighth time in a century and was sold to a billionaire. He employed David Wheeler and Simon Dorrell, the owners of Bryan’s Ground, to design the garden. Apart from the mature trees and the 170-year-old wisteria tunnel, everything in the garden is new since the 1990s. There are now a number of different gardens including a kitchen garden, which grows for the restaurant, a Dutch garden and a rose garden. From the sunken garden Jill took us through a pitch black tunnel with instructions to guide ourselves by keeping a right hand on the wall. We ended up in a tower in the centre of the maze, from which we eventually managed to find our way out after going down quite a few dead ends. 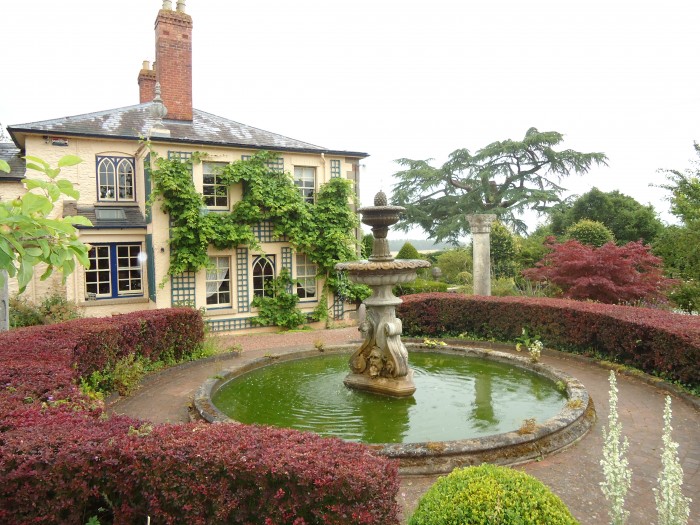 Our final visit of the day was to the Laskett Gardens, Much Birch.

Laskett means a strip of land outside the parish in Herefordshire dialect. The gardens covering four acres were created by Sir Roy Strong and his late wife, Dr Julia Trevelyan Oman from 1973 onwards and include a rose garden, an orchard, a kitchen garden and a knot garden. They are intended to be autobiographical gardens, reflecting the lives of Sir Roy and his wife. For example, the Victoria and Albert temple in the garden was built to incorporate a plaque given to Sir Roy in 1987 on his retirement from the V&A Museum. An inscription in Greek on the temple means “Mnemosyne Mother of the Muses”. Julia’s Walk was constructed in memory of Sir Roy’s wife and is a winding walk in contrast to the straight vistas and formal planting of the rest of the garden. 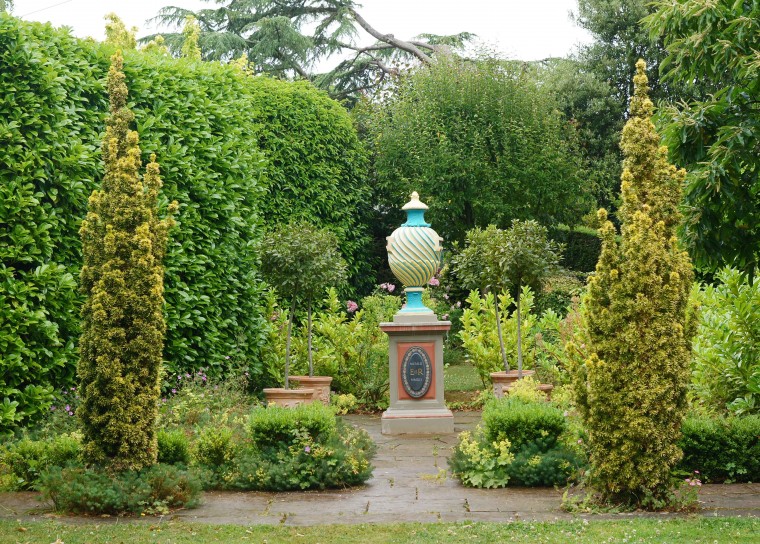 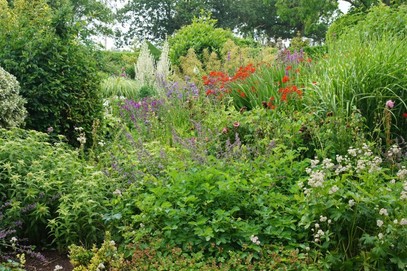 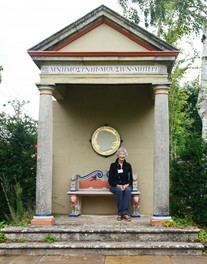 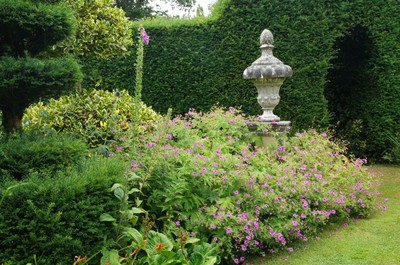 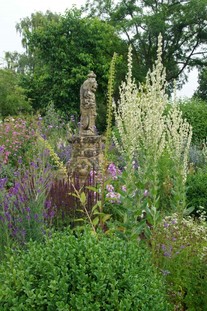 On Wednesday 15 July we visited Allt-y-bela in Monmouthshire.

We were shown around by the head gardener, Steve Lannin. The house had been restored by the Spitalfields Trust in the early 2000s. When it was subsequently purchased by the garden designer, Arne Maynard, about eight or nine years ago, there was no garden, only brambles, elder trees and a sloping area, which was prone to flooding. Once these challenges had been addressed, the original idea was to create a low maintenance garden. However, the garden has evolved over time and there are now plans for expansion. At the entrance is a copper beech spiral at varying heights from which you can see different views of the landscape. In front of the house is an amphitheatre where plays are performed each summer. On the back wall of the house is a rare rambling rose Rosa ‘Astra Desmond’, in front of which box and yew are planted. The Tuscan umber colour was inspired by a similarly painted house in Ireland. There are wildflowers on a slope further away from the house. There is also a kitchen garden with sweet peas, violas, nasturtiums and an apple tree espalier. 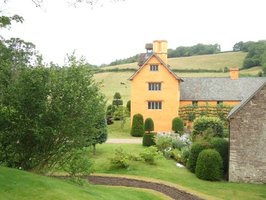 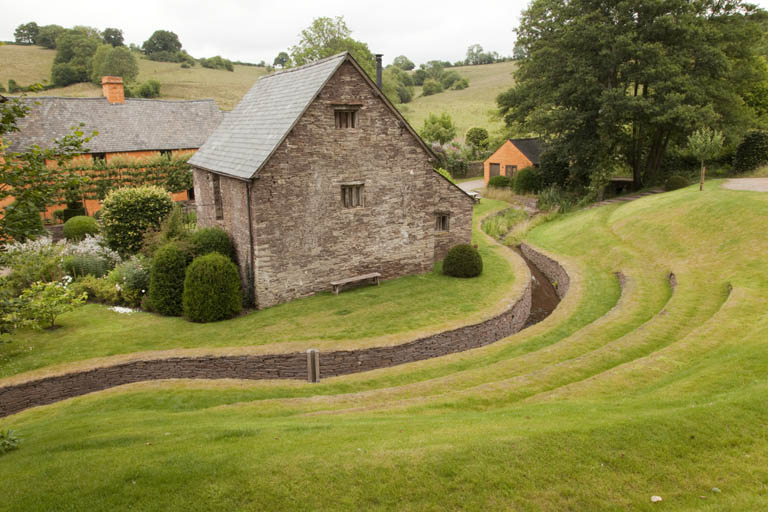 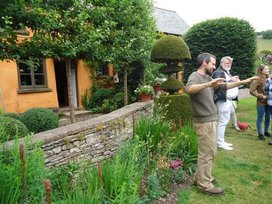 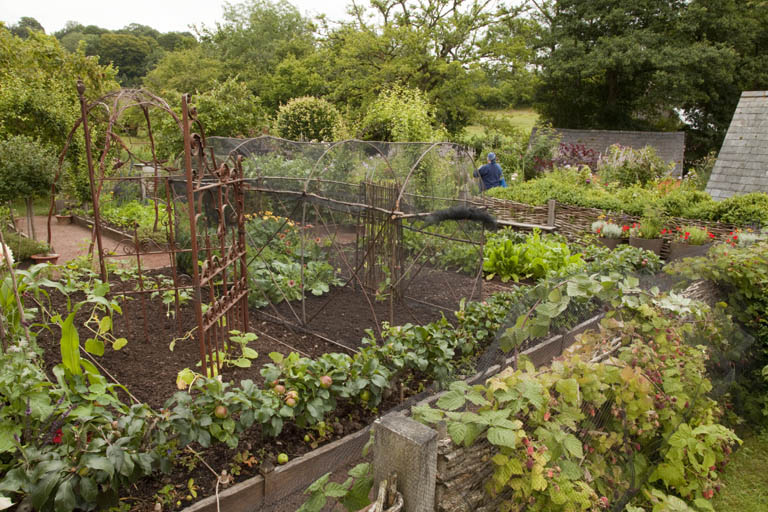 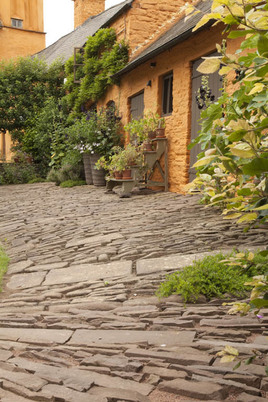 Cobblestones by the back door

Allt-y-bela is featured in The Gardens of Arne Maynard published by Merrell in September 2015. The garden is not open to the public but more information is available on Arne Maynard’s website.

I would like to,thank everyone who showed us round their wonderful gardens for making us feel so welcome and for their hospitality. A big thank you should go to Sue Bennison who drew up a very interesting programme for us and made all the arrangements. 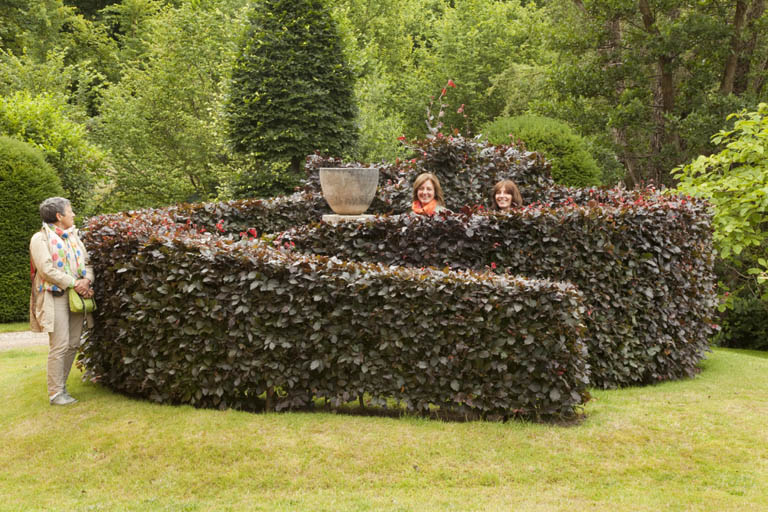 Hello from the beech hedge 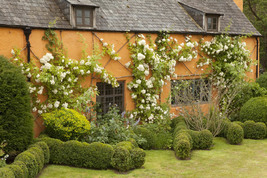