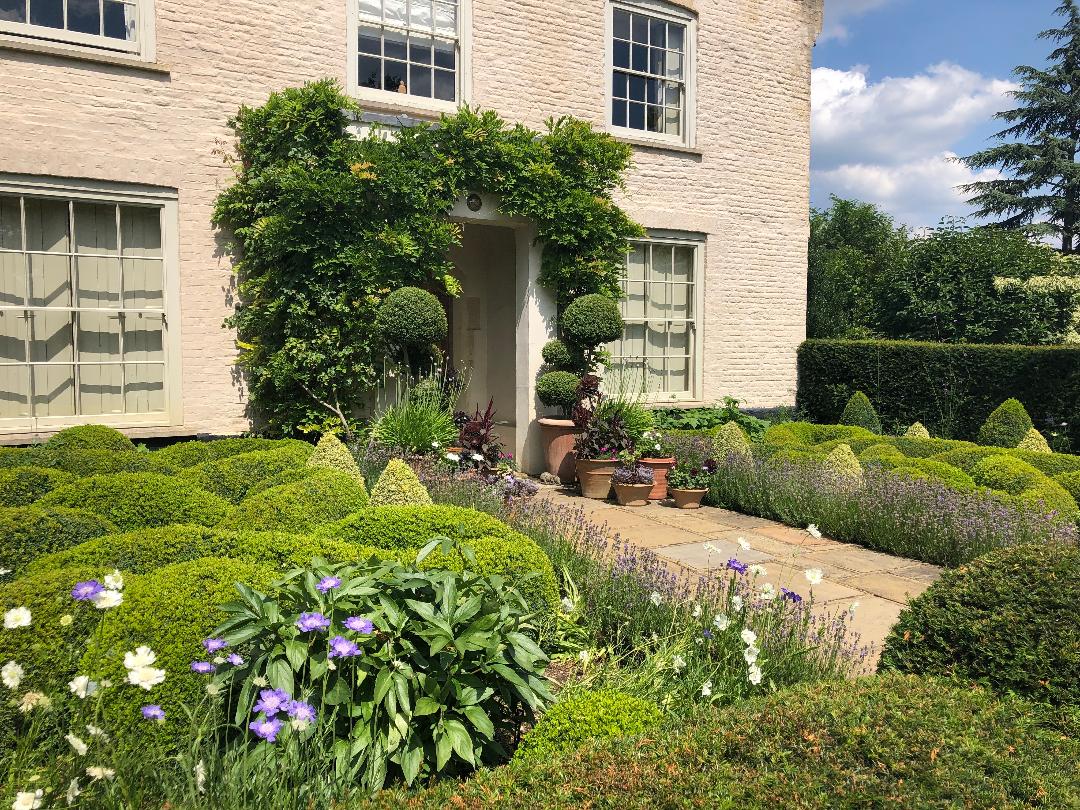 Alison Green a retired garden designer, owner and creator of the garden welcomed us to Theobalds on a beautiful sunny July day.
She explained the house was built in the early 1650’s, the land and house were part of the Royal Theobalds estate and sold off by parliament after the civil war to help pay the army. Captain Anthony Spinage bought the land and house. The current house is early Georgian, and the Green family have lived here since 1999. ​Work on the 2-acre site began immediately upon the blank canvas of grass, wilderness and boggy ground. The soil is heavy clay with clay pans, a challenging site. 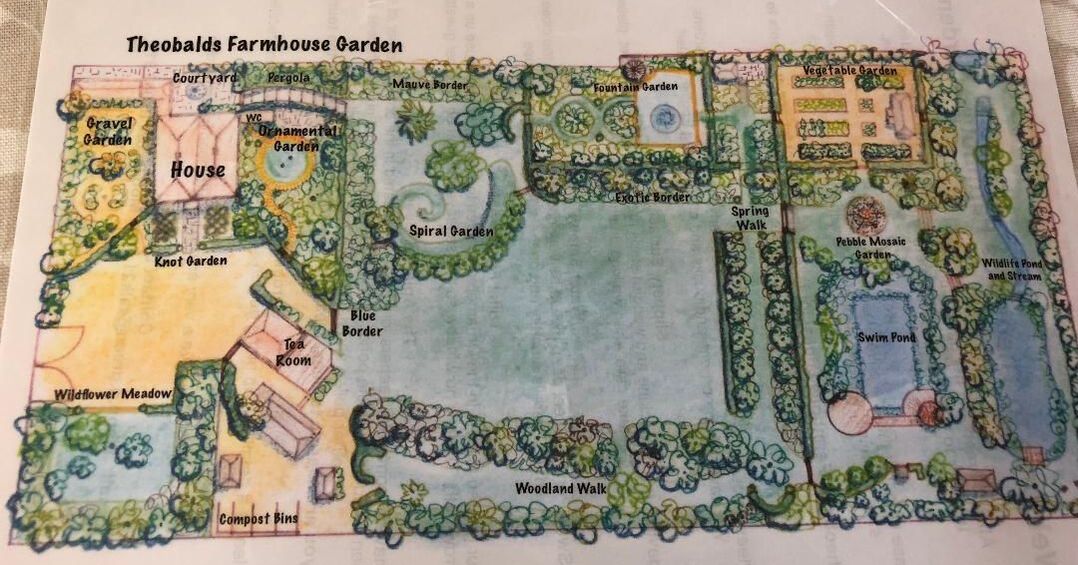 ​Alison designed the garden as a series of rooms in the ‘Arts and Crafts’ tradition with many large borders and different planting styles. She has included landform features with the golden section spiral grass bank and Betula utilis var.jacquemontii ‘Grayswood Ghost’ and used hedging and water as landscaping tools to great effect. The planting is successional. A great deal of effort goes into keeping the borders looking good throughout the year. The garden is a series of colour filled rooms, each with its own personality and ideas. Many of the areas are also colour themed. 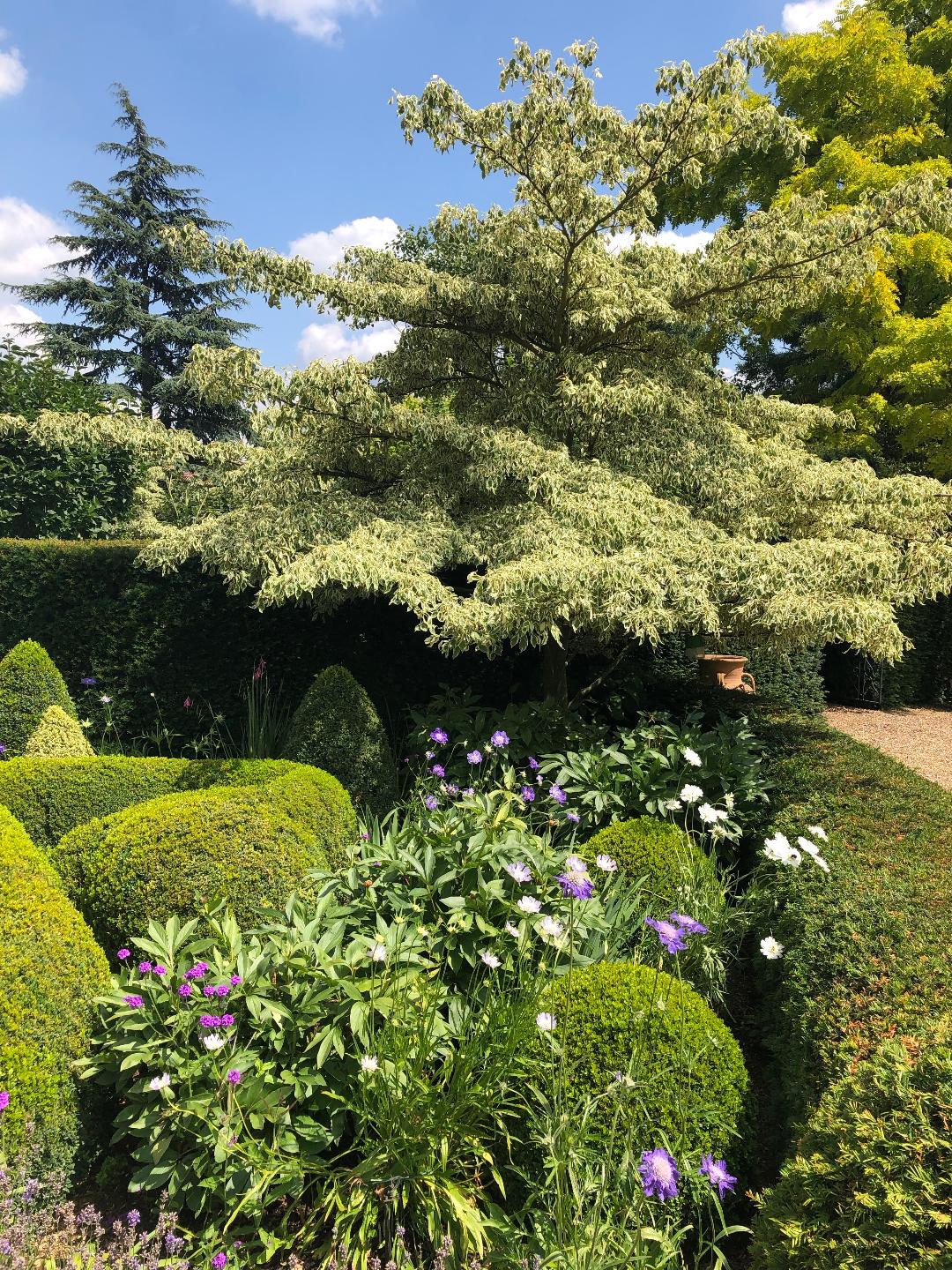 To the left of the house there is a gravel garden, introduced to replace the boxwood garden that succumbed to the box moth/caterpillar.

​In the front of the house she retains a small knot garden either side of the front door which adds a formal element to the house and there is seasonal planting to compliment the space and a collection of pots to frame the front door. 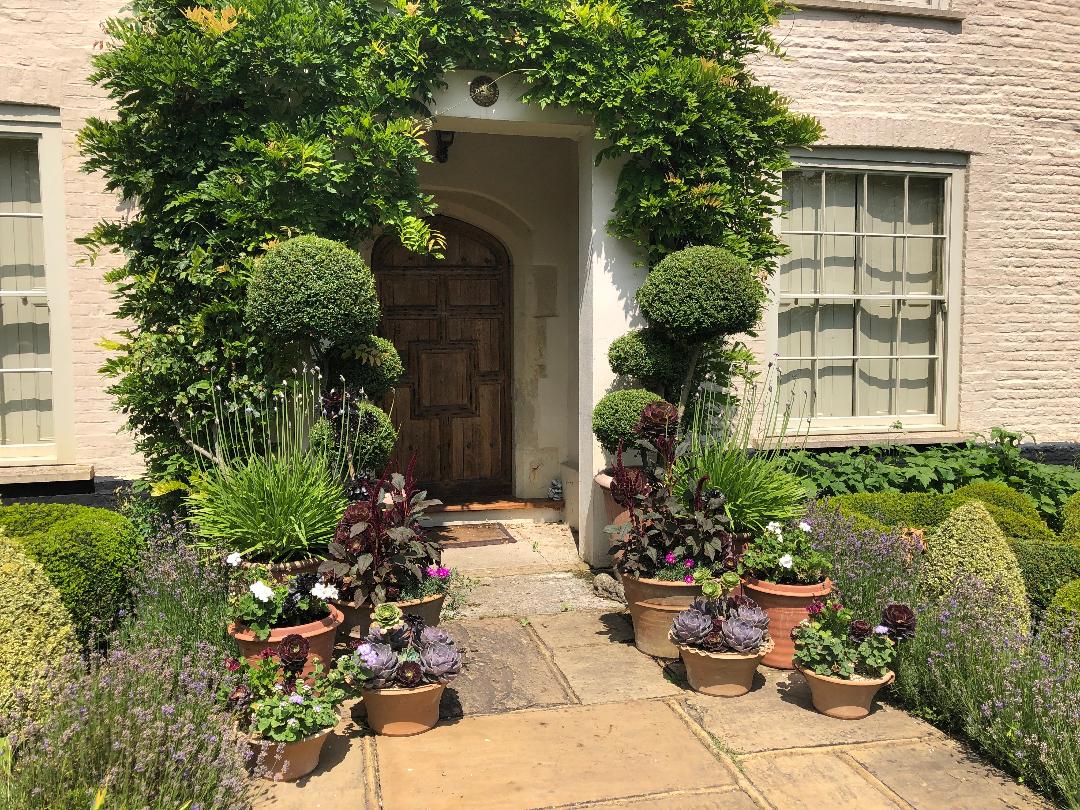 Pots at the door

A beautiful Cornus controversa ‘Variegata’ sits to one side and acts as a boundary marker. Squeezing through an opening to the right hand side of the house one enters the ornamental garden with a perfect circle of lawn and pretty cottage garden planting. A pergola features on the north side acting as an distraction to the neighbouring building. 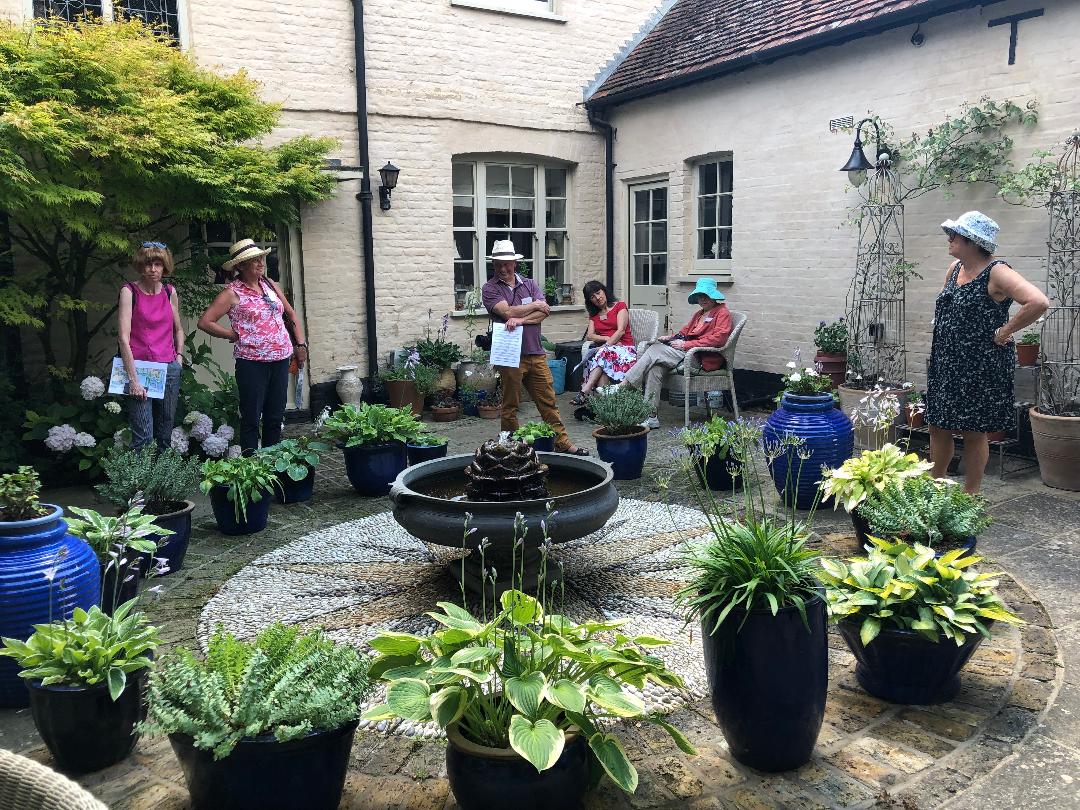 Moving to the rear of the house you arrive in the north facing courtyard with its central mosaic and fountain and bright pots, with a choice of shade loving plants. At the time of our visit hydrangeas were given pride of place. Alison advised that she doesn’t plant the containers but uses a plastic pot as a liner, this just fits inside the ornamental planter and then she can swap it out and change the seasonal contents from for instance tulips to winter bedding without the need to empty the planter, ingenious and an idea to be copied.​

From this area we walk to the big borders one in mauve and one in blue with lots of delicate lemon and white threaded through to lift it. Alison stressed how she works to make sure the planting in these borders keeps going for a considerable length of time from early spring till autumn. 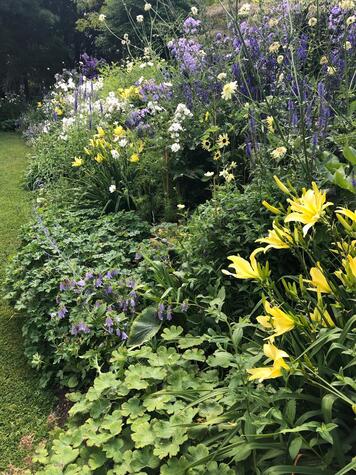 A spiral of turf covered earthwork based on the mathematical ratio of design often found in nature, e.g. a conch shell , and giving a feel of balance and harmony. It certainly was an interesting space and striking feature. 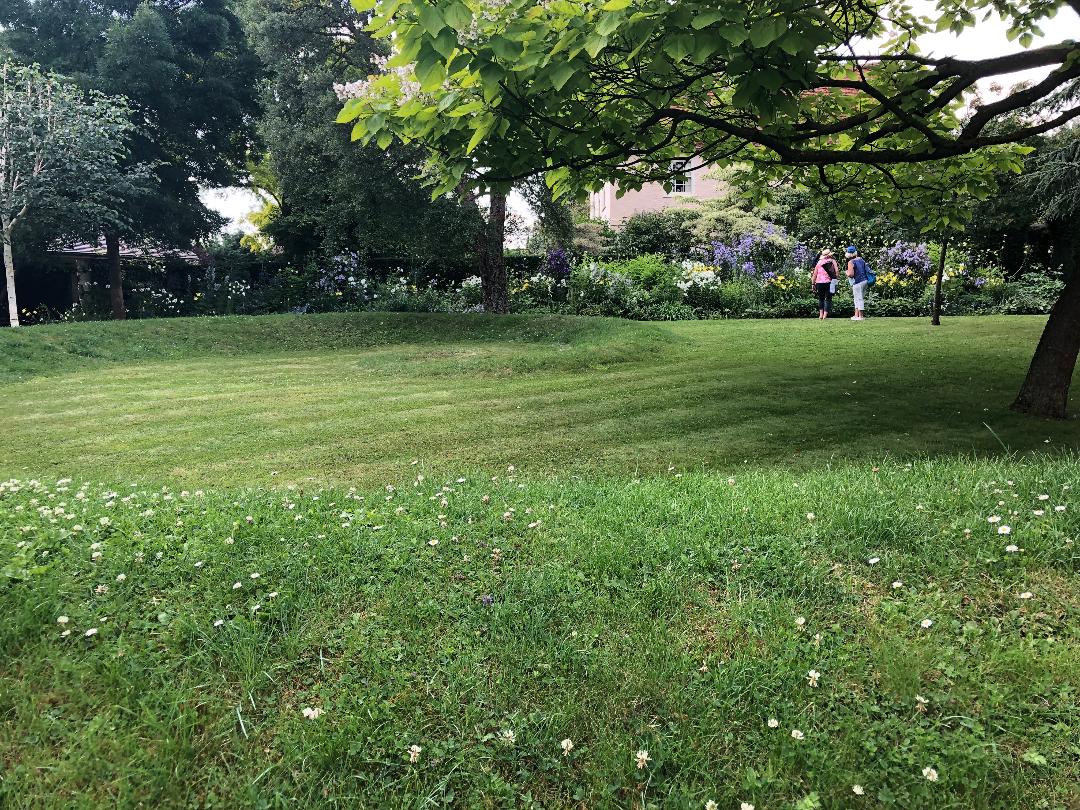 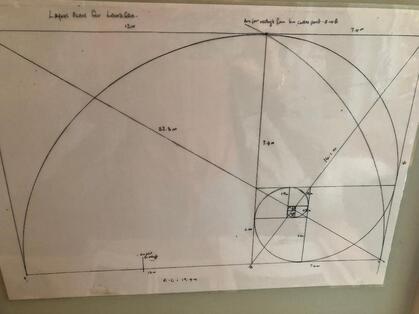 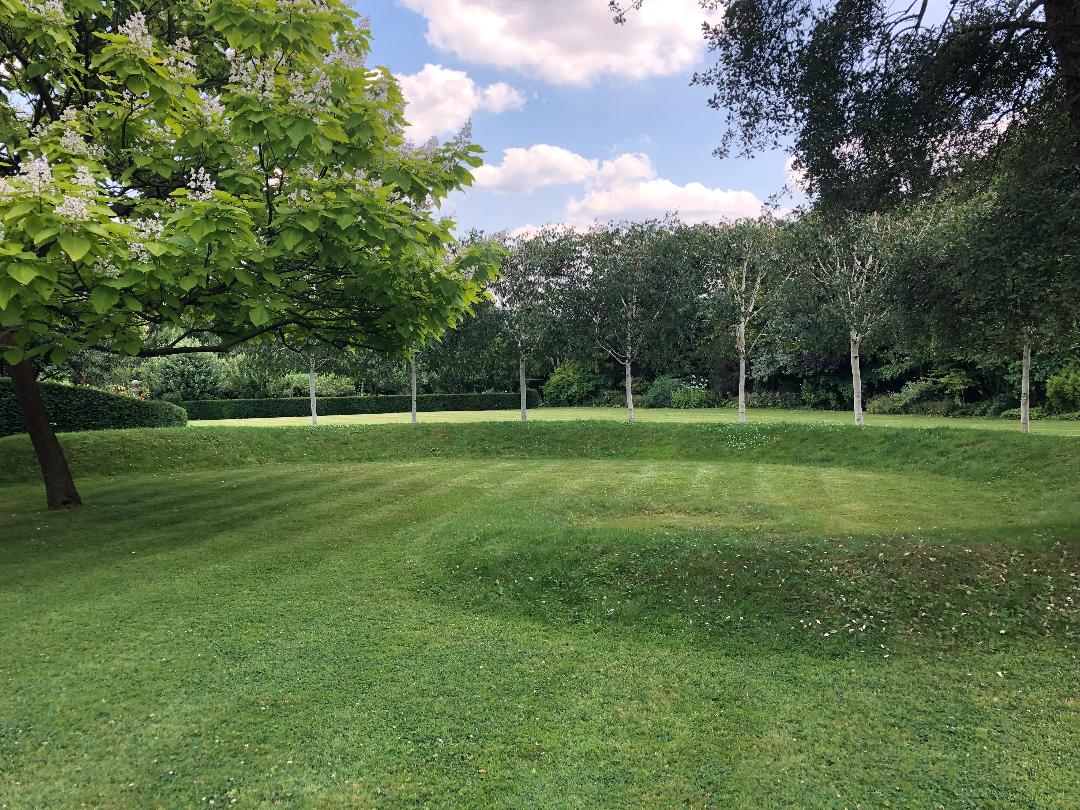 We then walked onto the exotic border full of hot reds, yellows, scarlet and purple a big undertaking at 27 m long and 5 m deep. Structure is added with Prunus serrula and hornbeam columns. 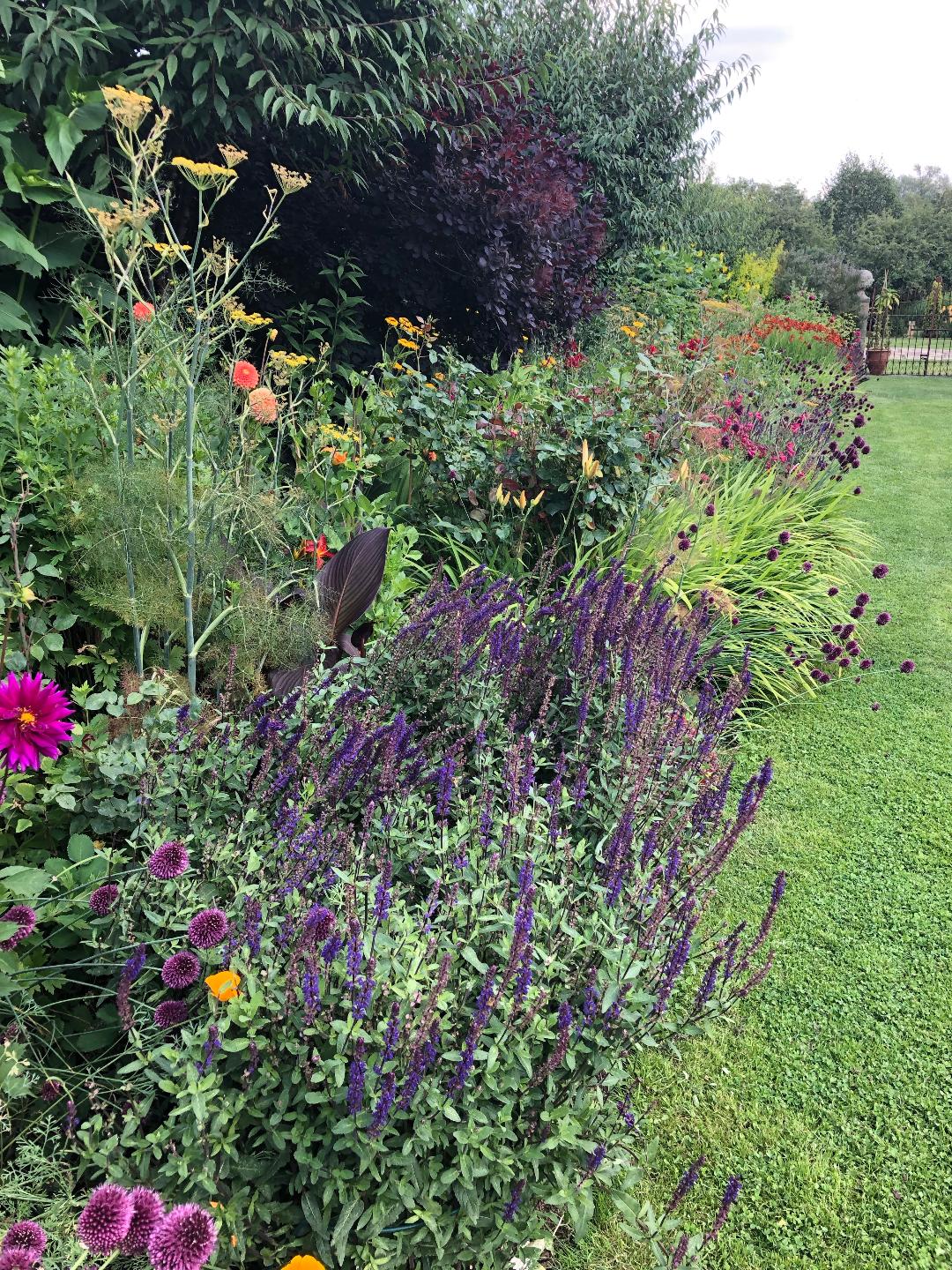 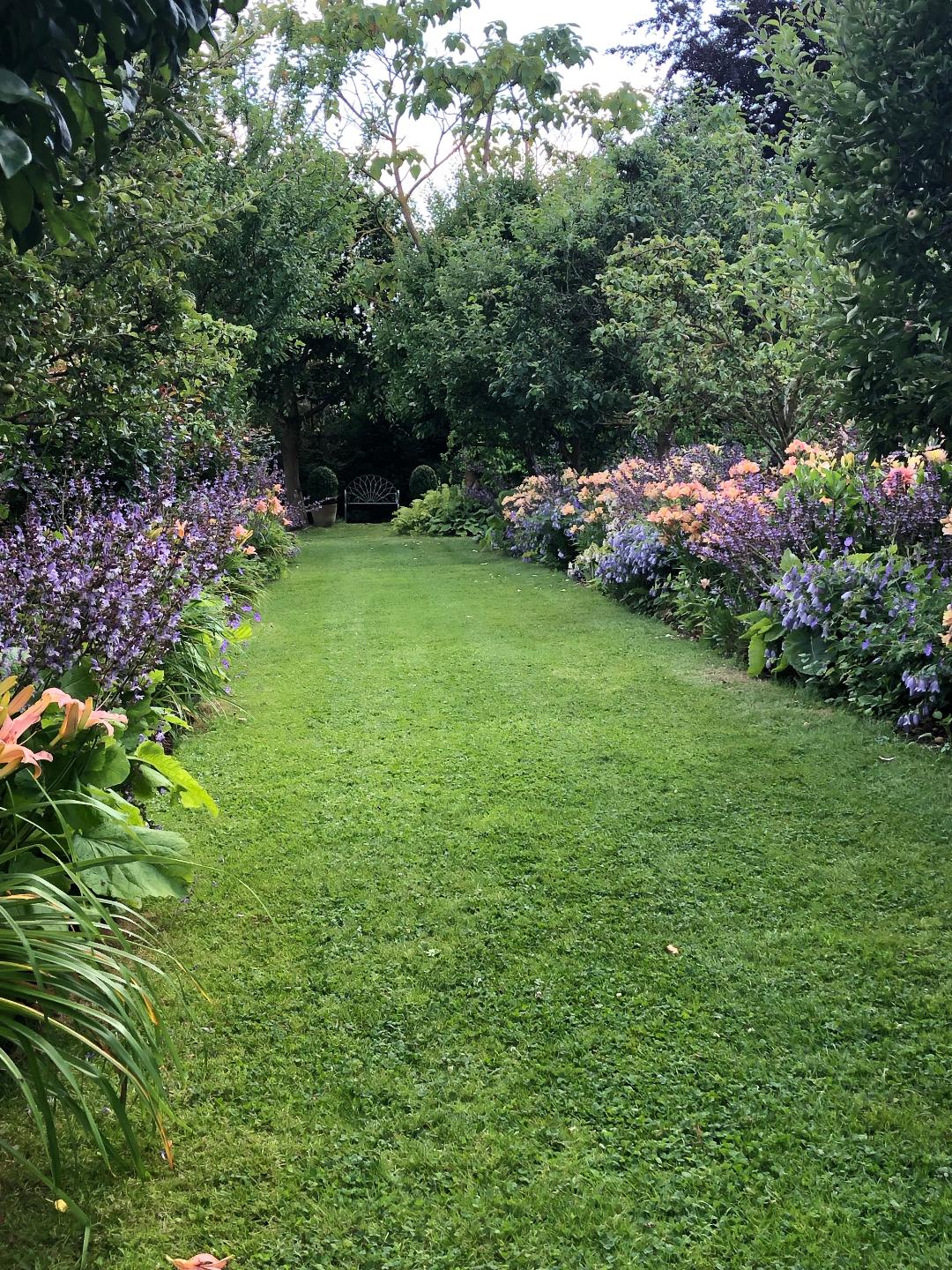 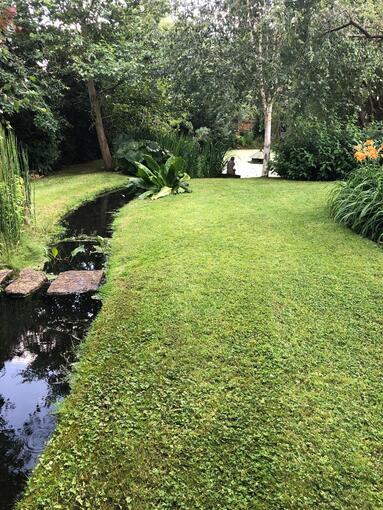 Around the corner and we move on to the lovely spring walk. In spring filled it is full of tulips but currently a really pretty mix of apricot and peach planting as the dominant colour, structure provided by the yew hedge backdrop and the fruit trees. ​To the right is the woodland walk which is at its best in spring, this forms the boundary to the garden on the side.
Walking though the Indian gate we round another corner we find ourselves at the water garden and swim pond. The whole area was created using a liner. The rubbish filled drainage ditch was transformed into a wild life friendly water garden The swim pond was dug out the resulting spoil used to create a flat area for another room, the mosaic garden.
​
There is a regeneration zone between the wildlife pond and swim pond with a layer of charcoal and then gravel in which the reeds are planted. The water is thus kept clean and free of chemicals. The pond is surrounded by Cornus sanguinea ‘ Midwinter Fire’ making a pretty autumn and winter display .

Below this area the old rubbish dump has been converted in to wildlife pond and man-made stream. It is a very tranquil and peaceful spot.
​
We move again to the pebble mosaic garden where the mosaic represents the four elements of fire, earth, water and air to remind us how critical all these are for a healthy garden. 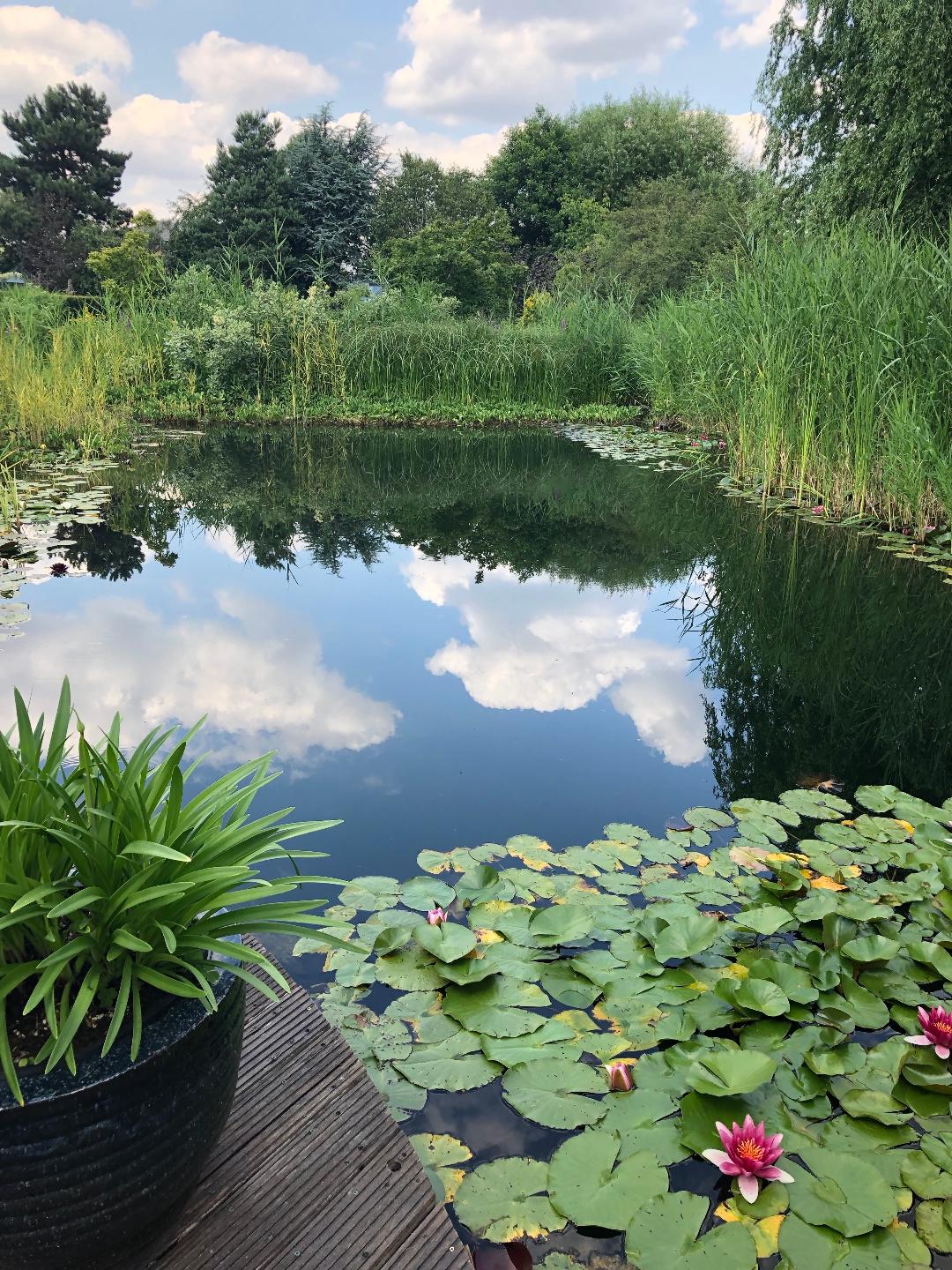 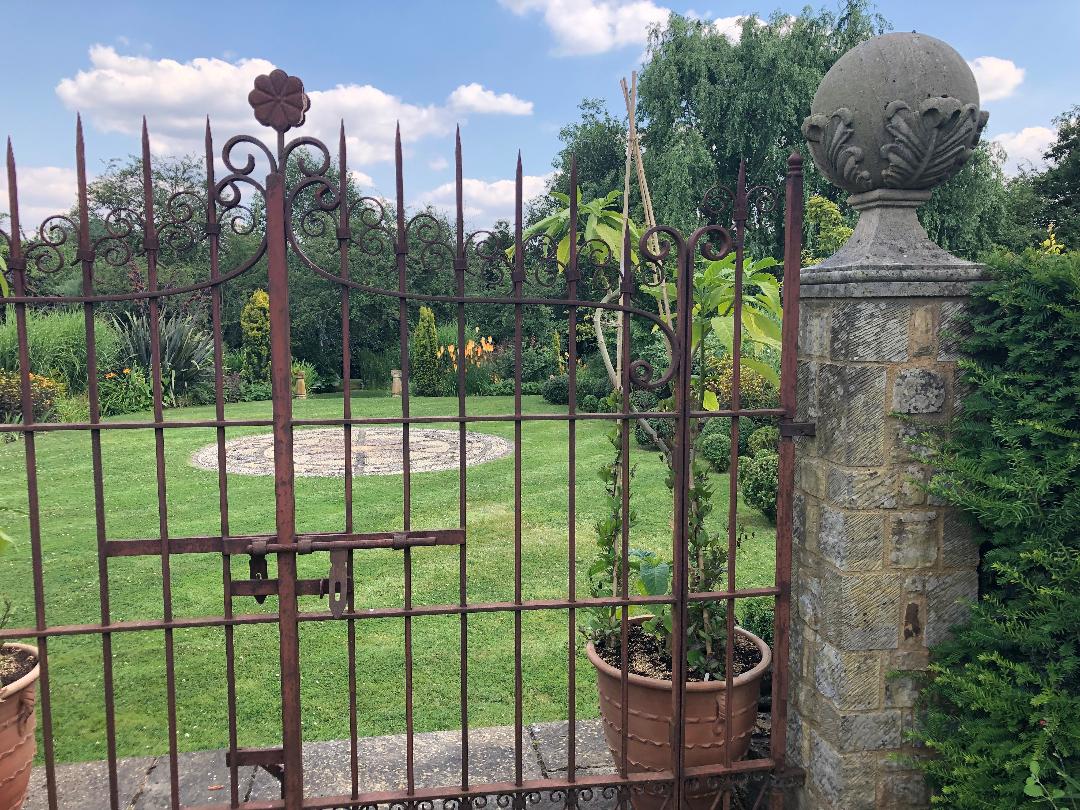 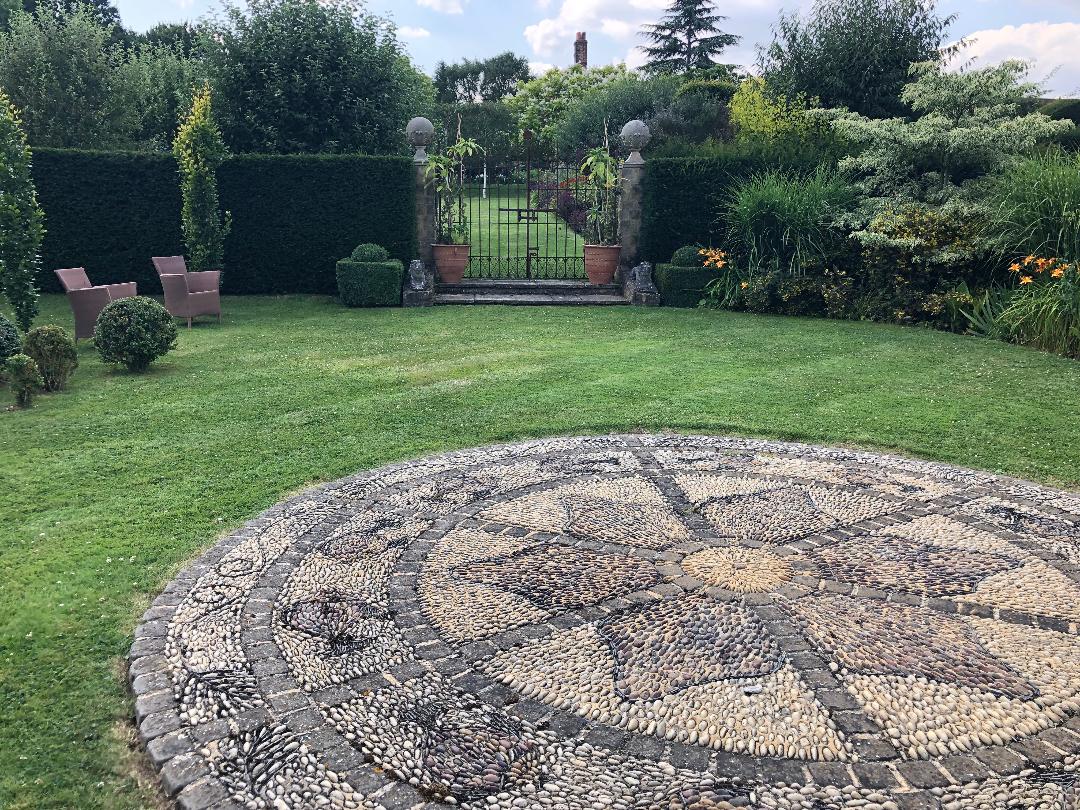 No garden like this could be complete without a vegetable garden, here they employ the no dig method and had a vast array of very healthy-looking produce and fruits. 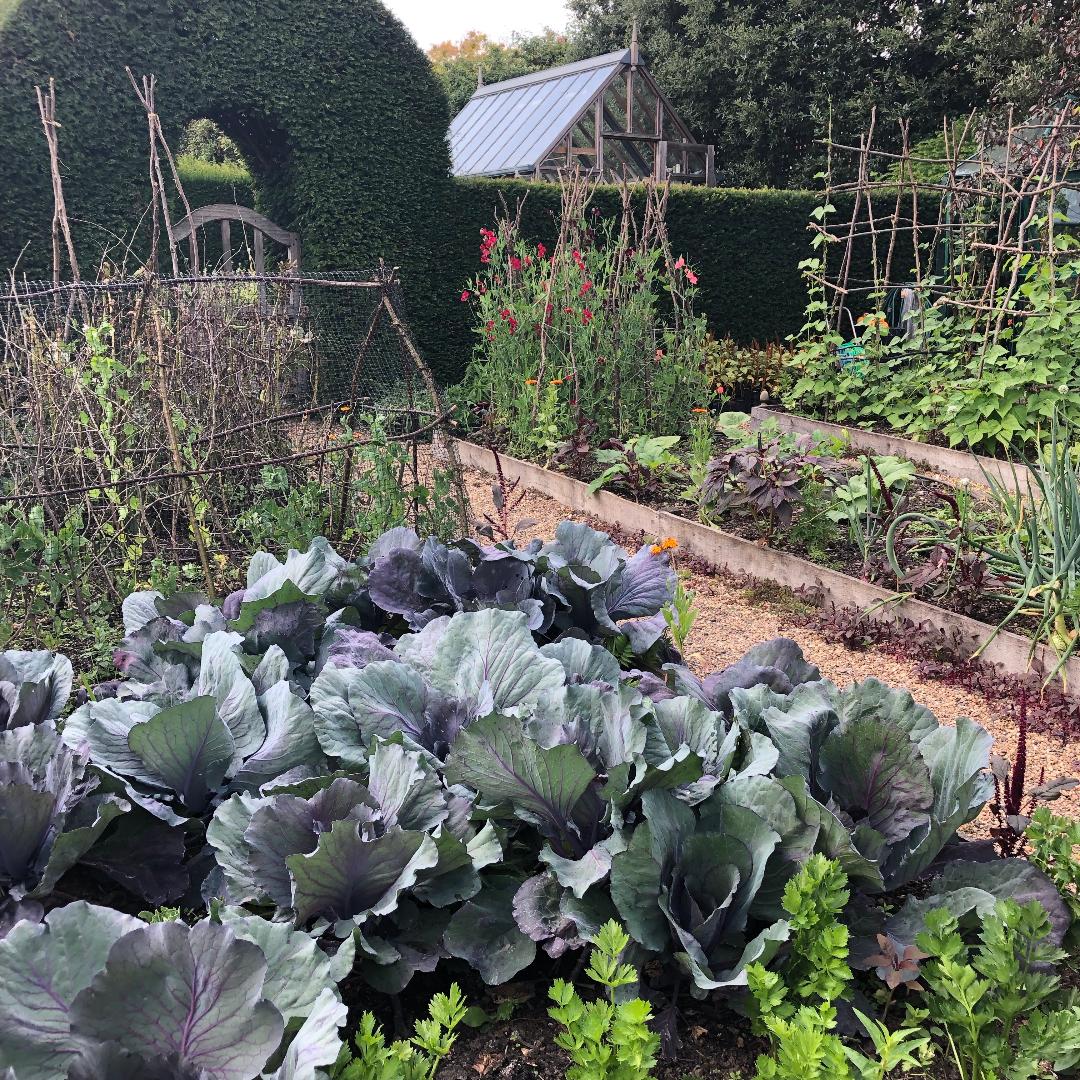 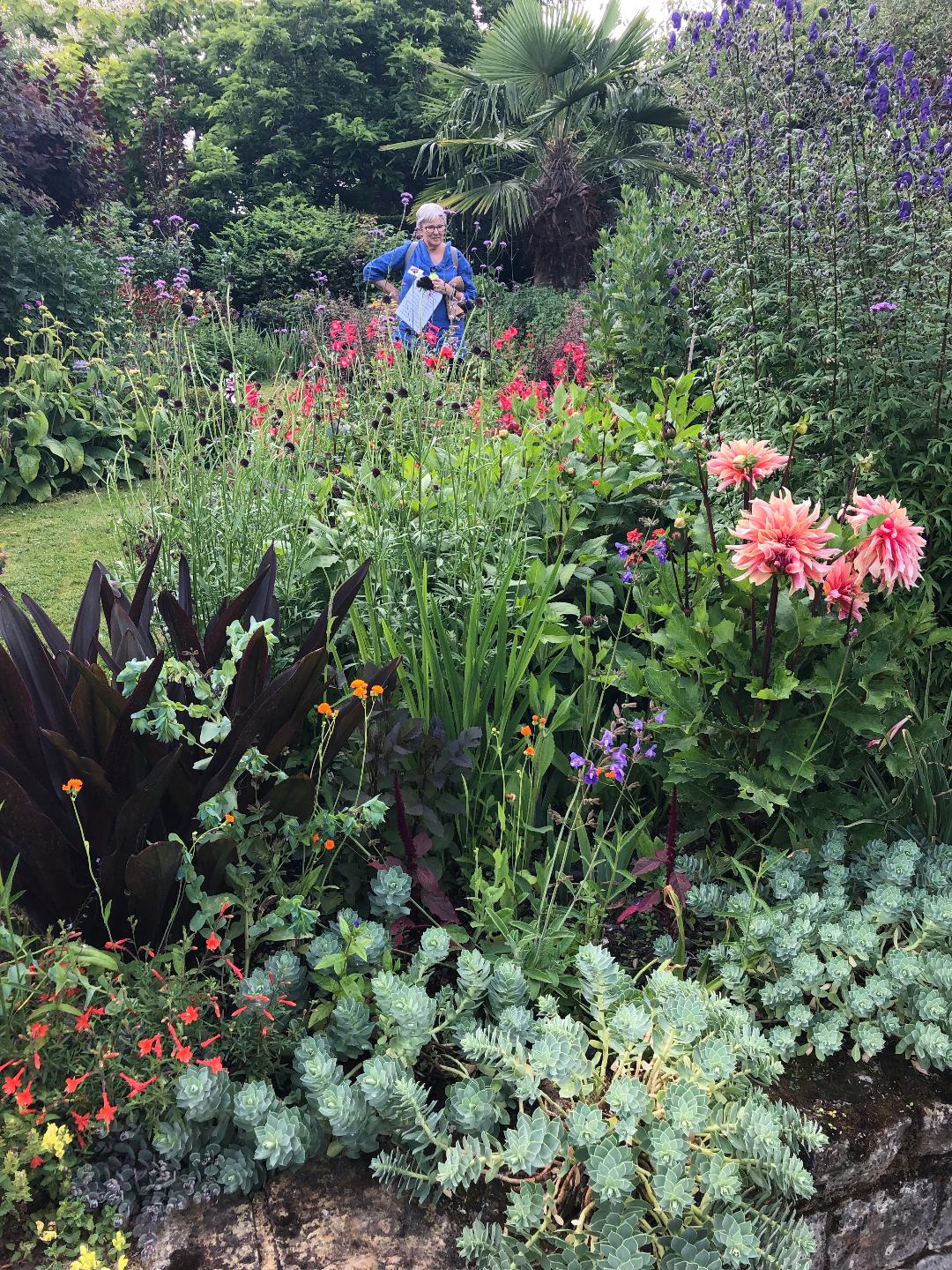 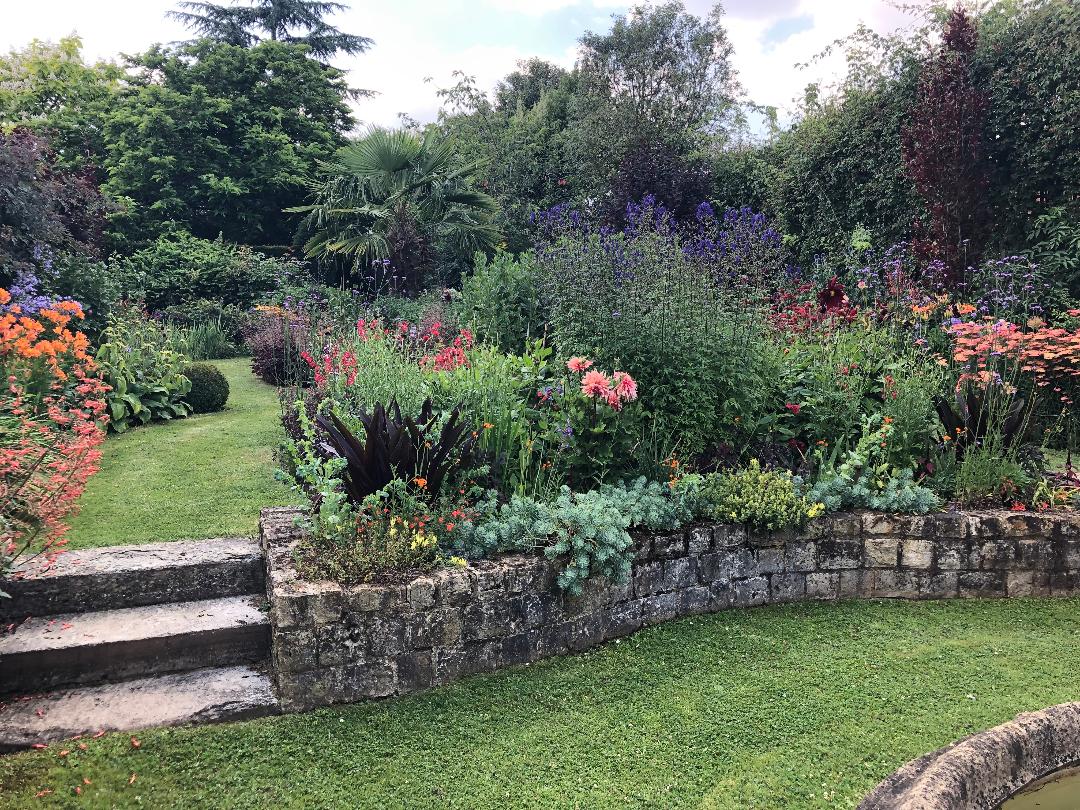 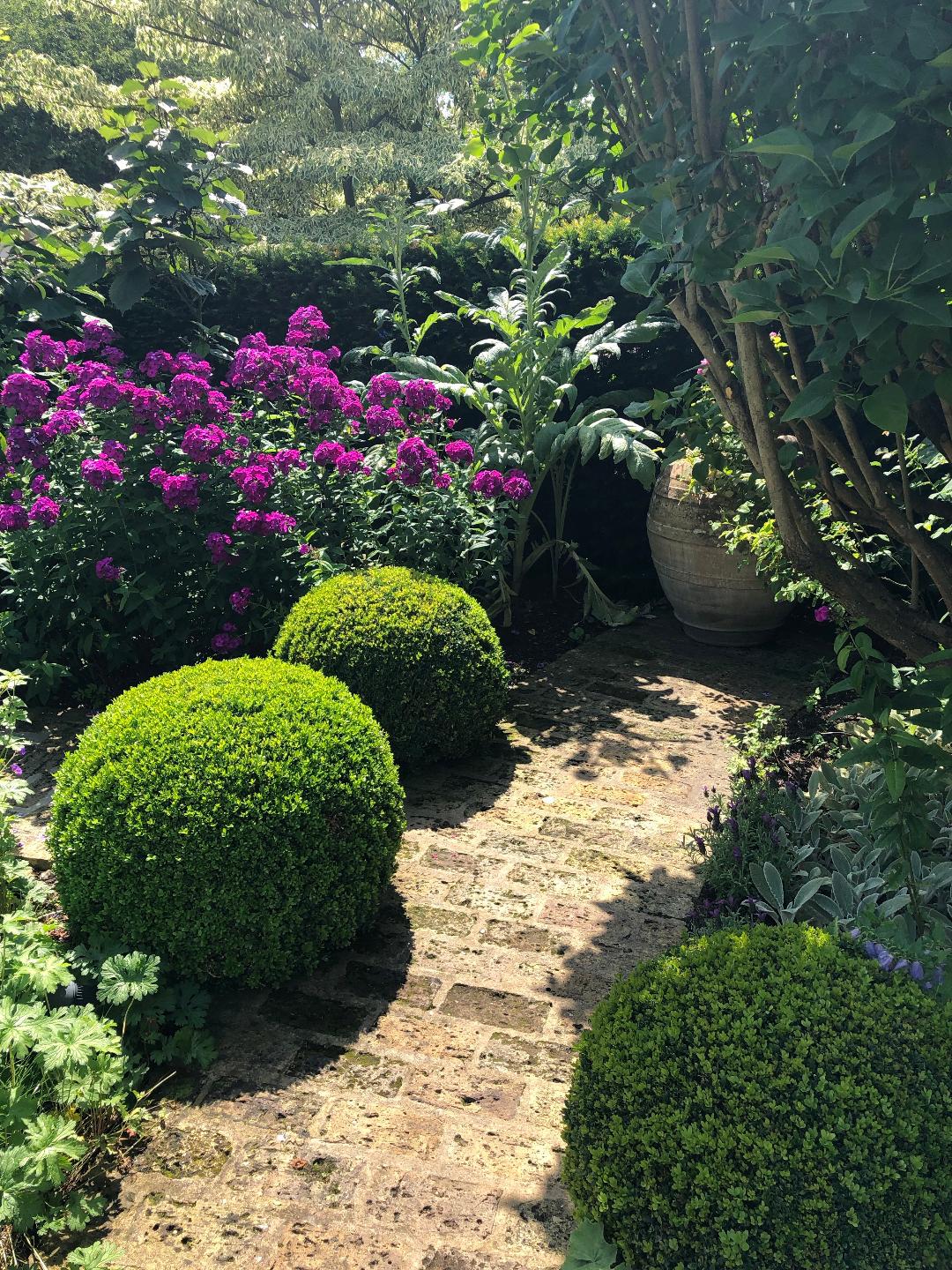 We enter our final room, the fountain garden filled with dahlias and later summer planting. We couldn’t fail to be impressed by the amount of hard work Alison and her gardener put into Theobalds, it really is a labour of love.

As if the tour wasn’t enough Alison and her gardener gave us splendid tea and cake to round the day off.​ 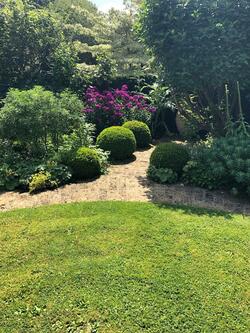 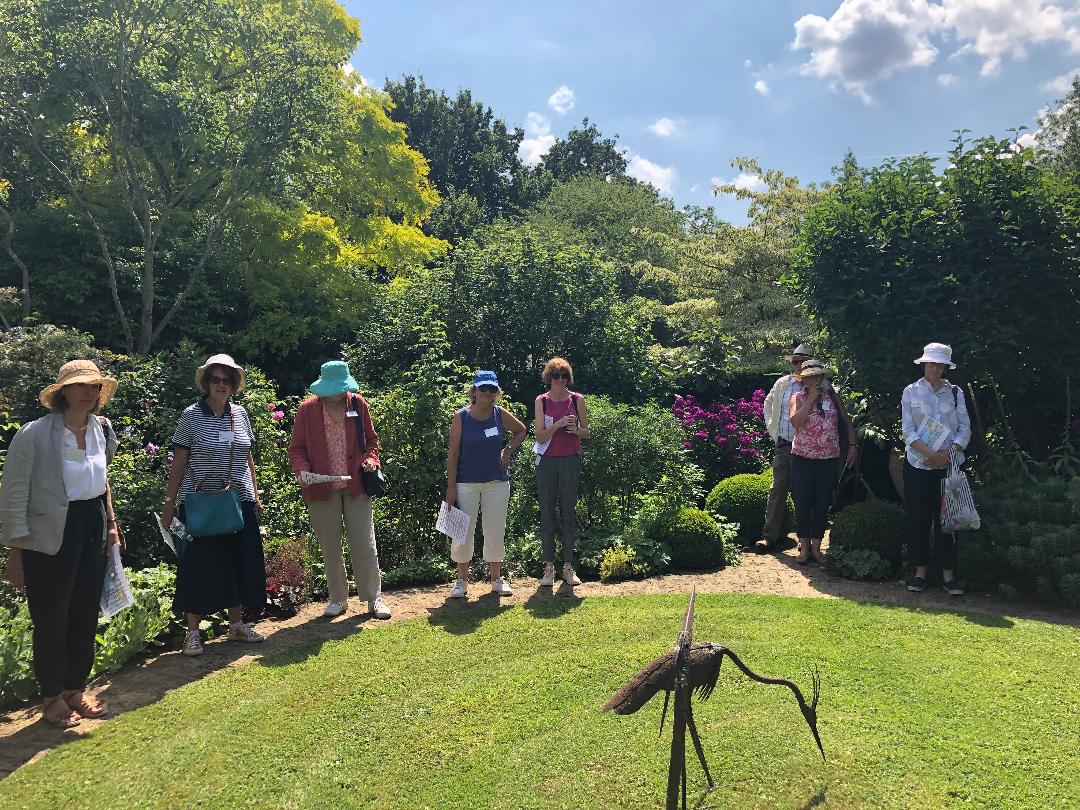 Members in the formal garden