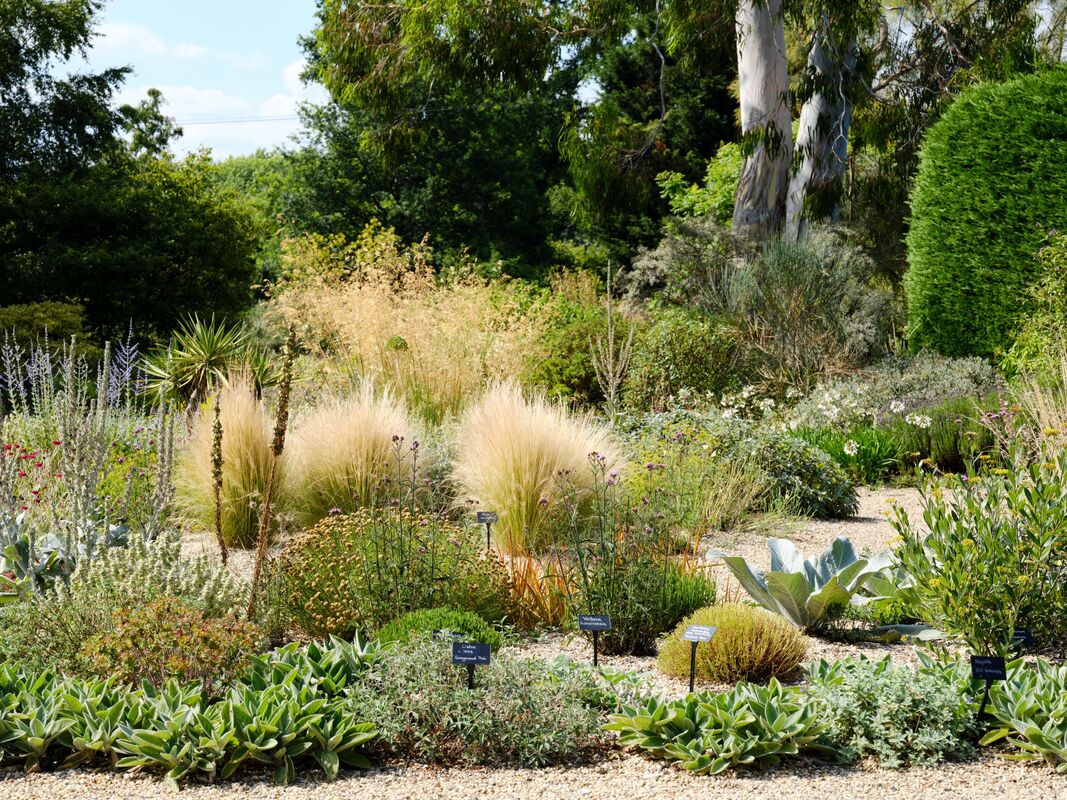 For a while it looked as though the coronavirus pandemic might put paid to this visit, but as things worked out we simply needed a bit of reorganisation.
​
Catherine Horwood Barwise, MPG member and biographer of Beth Chatto, was originally going to talk to us during our visit to the gardens, but instead gave her talk as a Zoom presentation a couple of days beforehand. Catherine was on top of the technology and did us proud with a fascinating talk on Beth Chatto’s life, discussing both the plantswoman and the person. Beth came across as a lively, opinionated and determined gardener, with an eye for considering the environment first and deciding what might be a suitable plant, rather than the more common approach of choosing a plant and then modifying the environment to suit ​ (the latter being, I have to admit, what I’ve spent most of my gardening life doing).

Beth Chatto’s approach to planting has frequently been summed up as the right plant in the right place, though the truth is a little more subtle than that, as was demonstrated later when we had our tour.

Catherine’s evocation of Beth’s personal life was rich and illuminating: her early years involved moving between fairly primitive cottage homes – no electricity or running water – as her father, a policeman, was posted to serve a variety of Essex communities. Her father was a passionate gardener and she inherited his interest, and this led to her meeting and subsequently marrying Andrew Chatto, himself a plantsman of note as well as being a local fruit-grower. They lived in the Chatto family home to the west of Colchester, but a conversation with Cedric Morris – an artist and gardener and relatively near neighbour – convinced her that the soil wouldn’t allow her to create the garden she desired; thus they set up home in one of Andrew’s orchards east of Colchester, designing both the house and garden that can be visited on the edge of the village of Elmstead Market today.

There was much of interest in Catherine’s lecture and, rather than having me make a mess of transcribing her talk, you’ll be far more entertained by getting hold of Catherine’s recently published biography Beth Chatto: A Life with Plants (Pimpernel Press). And you can see the whole Zoom talk here.

​The day of our visit arrived and we were warmly welcomed by David Ward (Director) and Åsa Gregers-Warg (Head Gardener). After introductions and dividing into manageable groups we went for a tour of what is probably Beth Chatto’s most famous creation, and certainly a topical one on a hot and sunny summer’s day, the Gravel Garden.

The Gravel Garden is something of a wonder to gardeners. Sandy gravel some five or six metres deep in one of the driest parts of the country is hardly an easy proposition for gardening. That it might be possible to create such a beautiful garden, and never to add water, is quite remarkable. The garden was inspired by a visit Beth took with Christopher Lloyd (of Great Dixter) to New Zealand, where they encountered plants growing in the flowing lines created naturally in a dry river bed.  In 1991 Beth set about converting an old car park into a similarly sinuously styled dry river, arranging hosepipes to define the flowing lines and improving the soil while retaining the fundamental well drained character, and topping this with a thin layer of gravel. The following year she started planting. 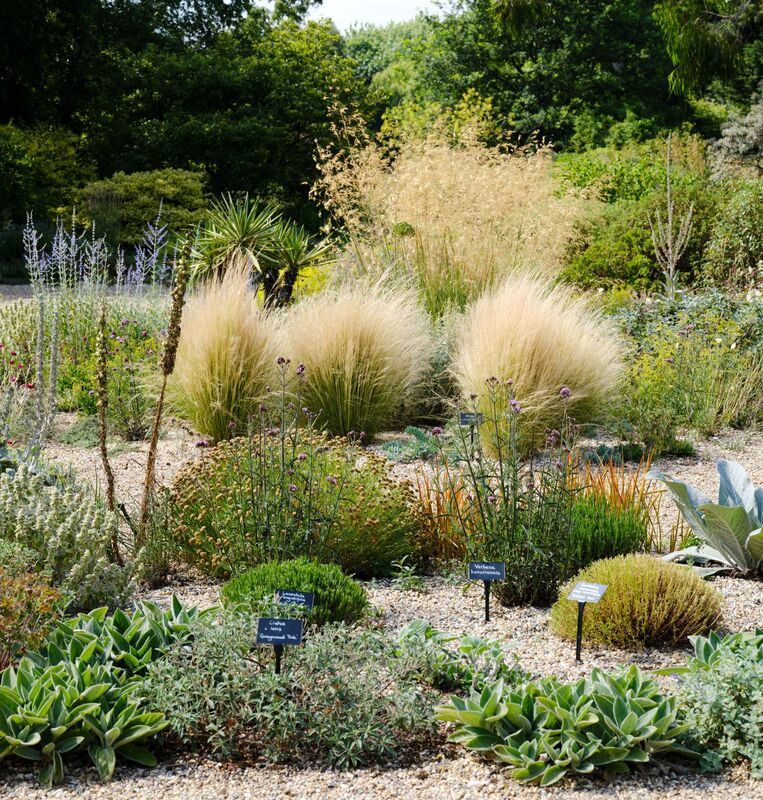 Layering to draw the eye through the scene: ground-hugging Cistus x lenis ‘Grayswood Pink’ and Stachys byzantina give way to clumps of Verbena bonariensis and Lavandula angustifolia, whilst above these, with an entirely different texture, are the grasses Stipa tenuissima and Stipa gigantea 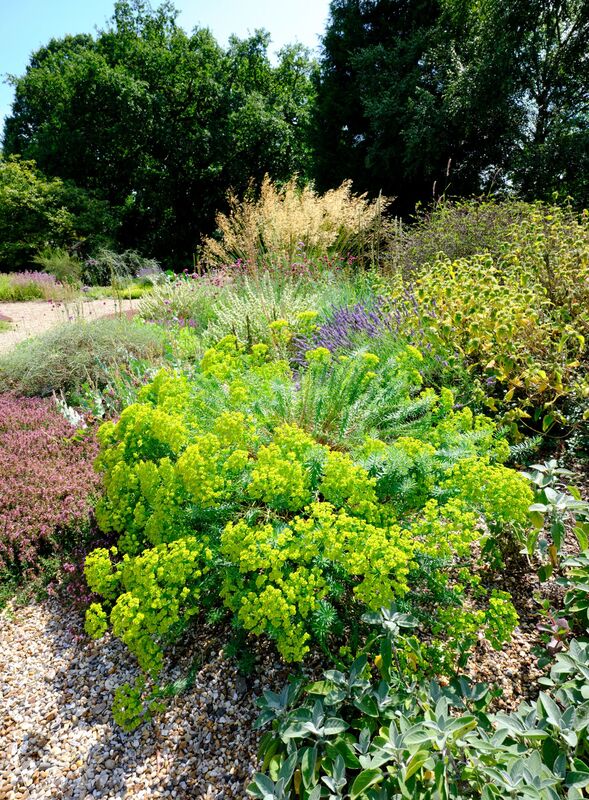 The plan was for form, texture and contrast, and arrangements that would lead the eye up from the foreground through successive layers. Key to success was starting with small plants that would develop roots with which to find sufficient moisture, giving each new plant some improved soil in which to start life, and giving each plant the space to grow into its natural shape. The poor soil also leads to stronger plants that stand upright rather than flopping to the ground. After 30 years, the garden remains uncrowded and the eye follows naturally from plant to plant as originally intended. It all looks and sounds so easy. 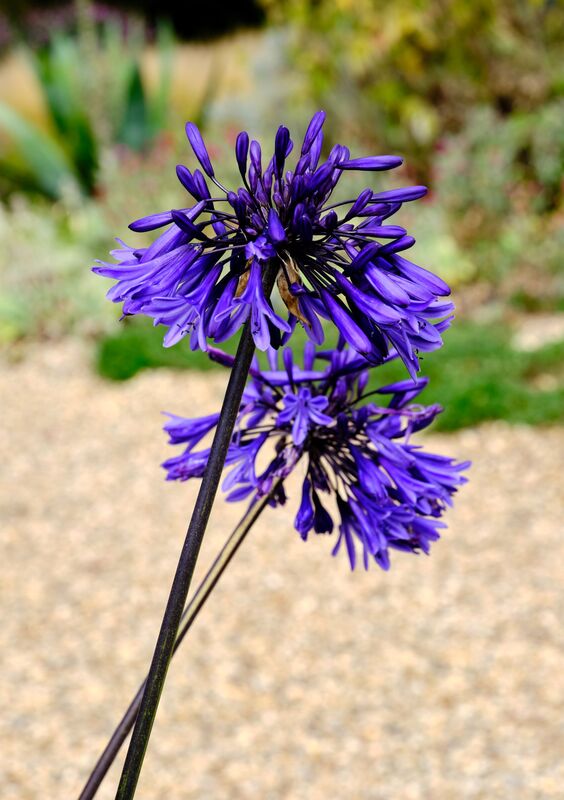 There’s a huge variety of Agapanthus throughout the gardens – this is ‘Midnight Star’, which has unusual dark stems and deeply coloured flowers 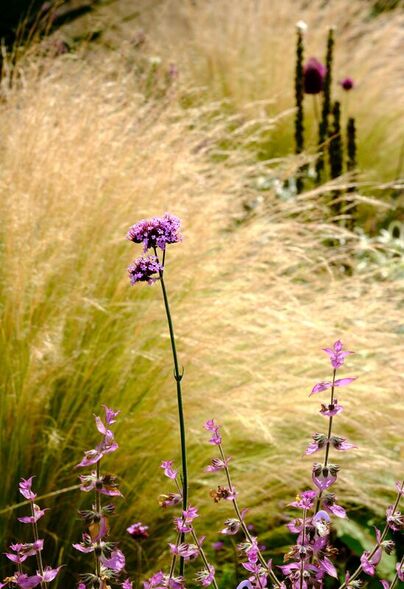 Salvia sclarea var turkestanica and a lone Verbena bonariensis stand out from Stipa tenuissima, used as a foil throughout the garden. 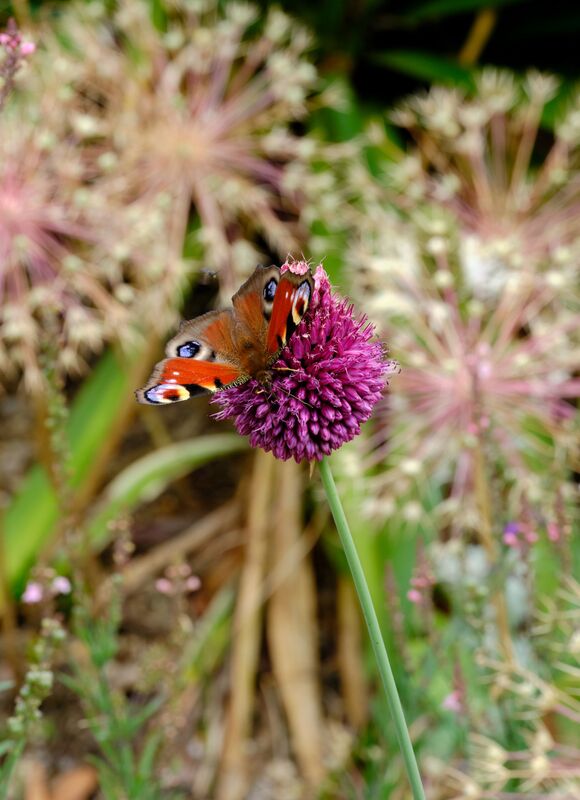 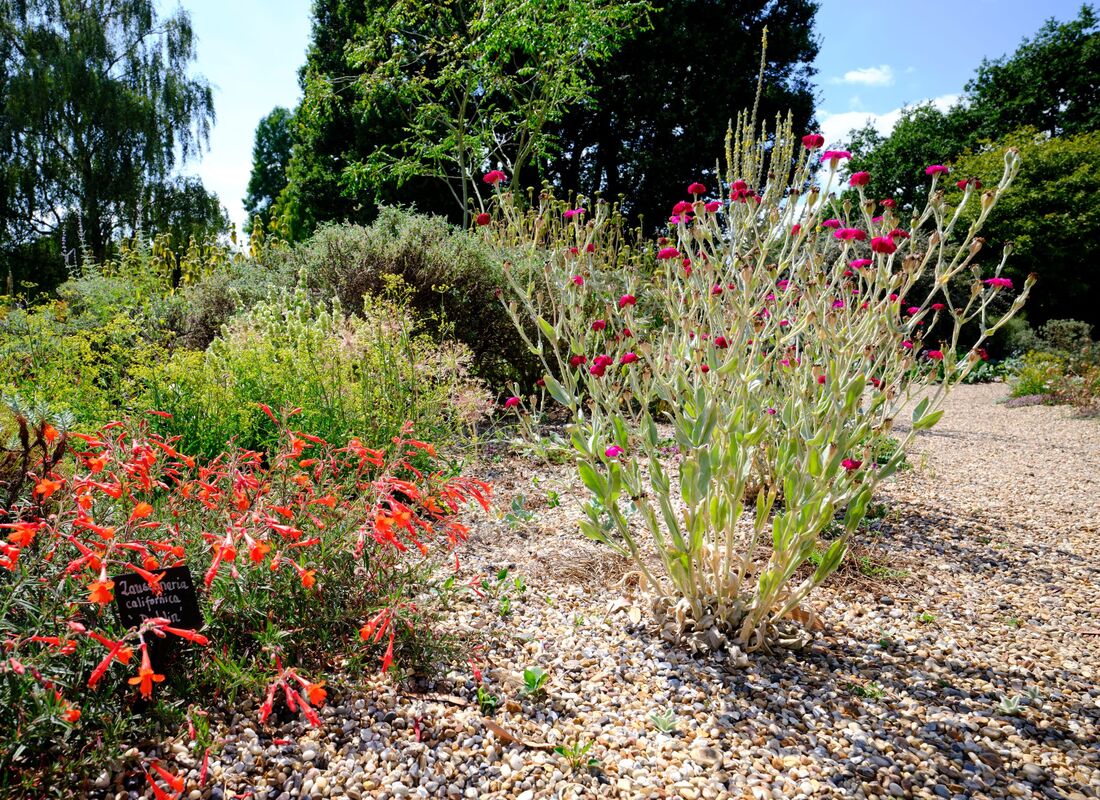 So it is worth noting that each of the gardeners I spoke to said that the Gravel Garden was the most labour-intensive part of the gardens to maintain; gravel is the perfect seed bed so there is a constant need for dead-heading and thinning, and the more thuggish plants need constantly to be reined in to maintain the open nature of the planting vital to the river bed theme.

​After the dry garden we had a stroll through the Water Garden and the newly-planted Reservoir Garden before a delightful picnic lunch, which included more cakes than I should have eaten. 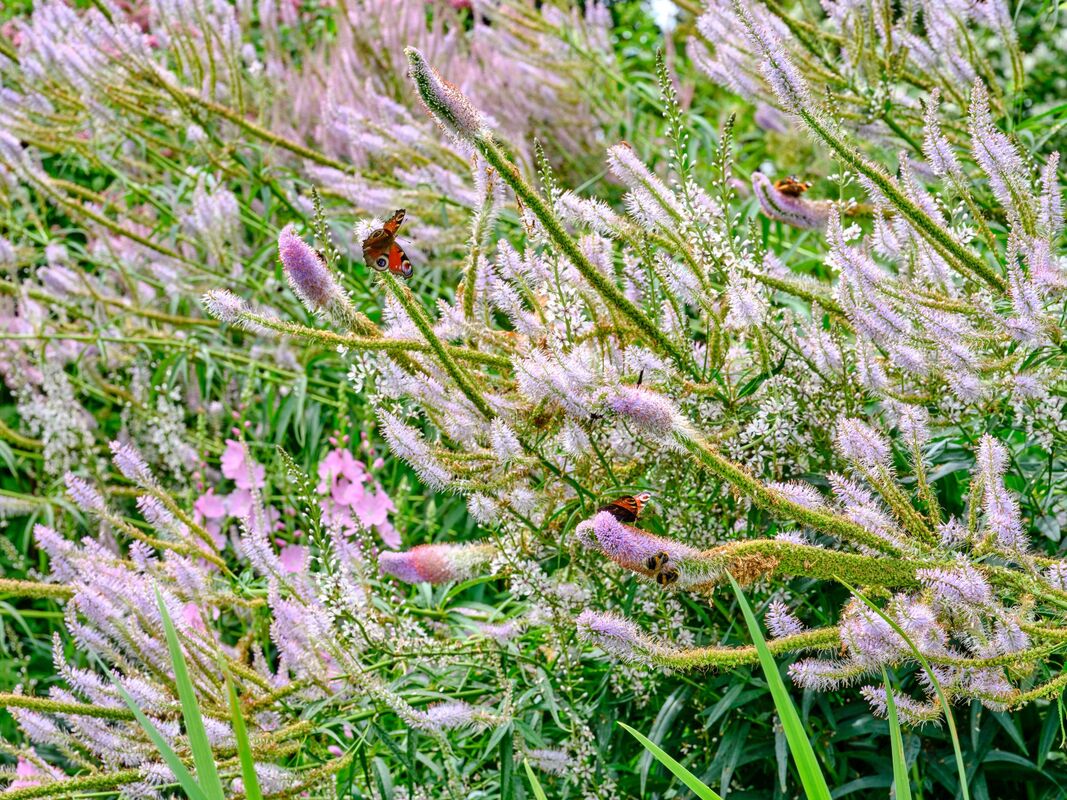 Veronicastrum verginicum makes an impressive splash in the Water Garden, and proves popular with butterflies and bees – at times there were a dozen or more Peacocks flitting about 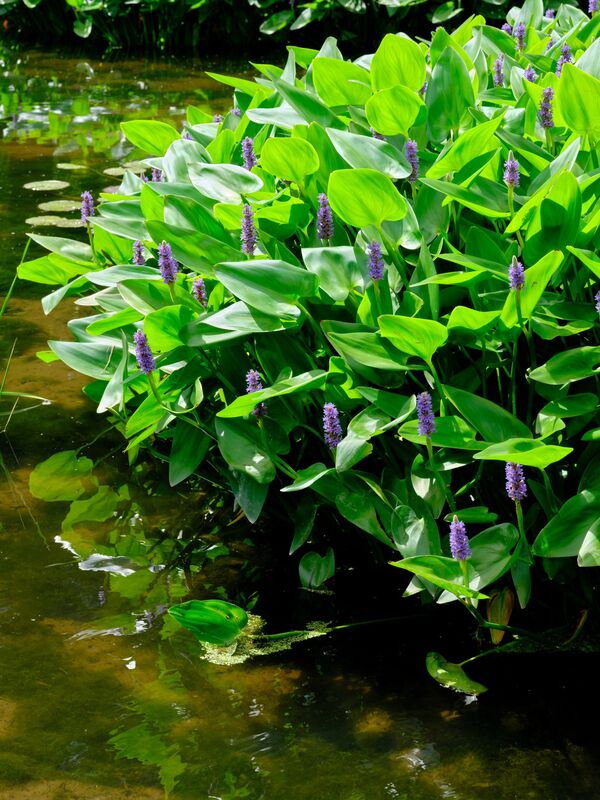 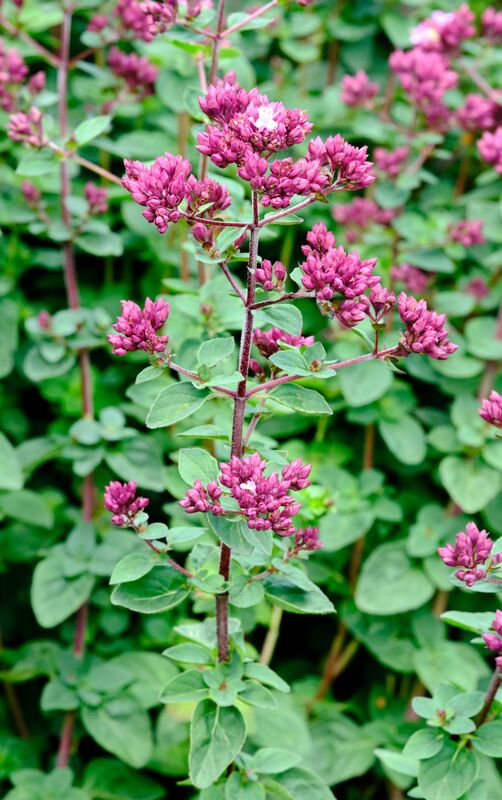 Origanum ‘Rosenkuppel’ in the Reservoir Garden 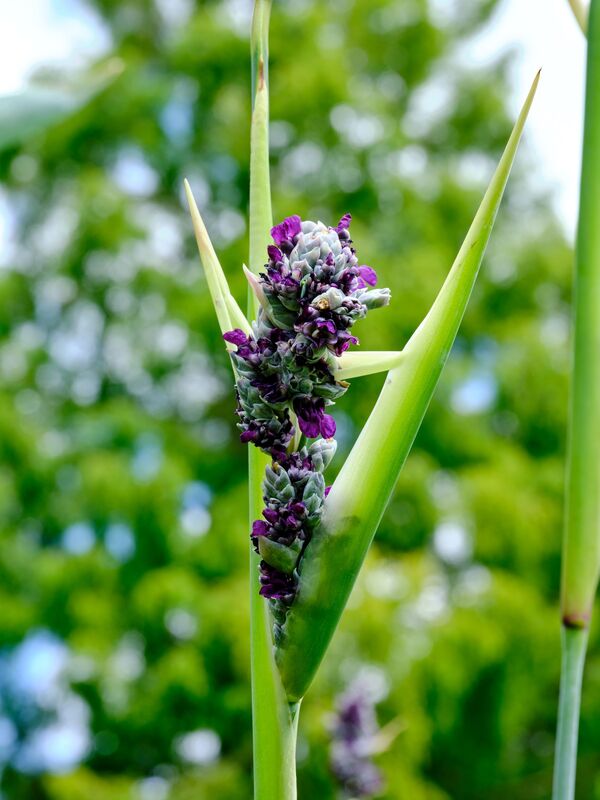 Flower head of Thalia dealbata, a marginal from ​the Water Garden 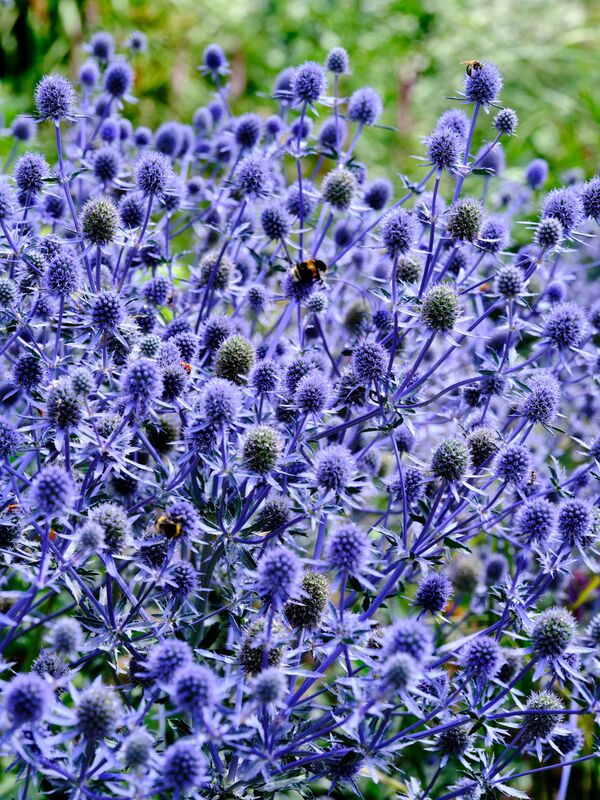 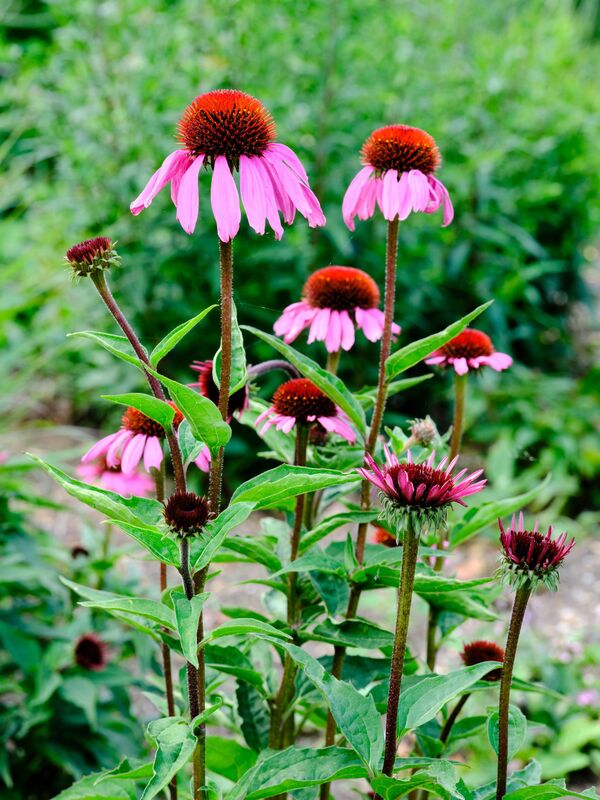 Most of us then took to the aisles of the plant centre; unusually most of the offerings are self-grown and taken from the garden itself, and it is a real treat to find that the plant about which you’ve carefully noted the details in the garden is actually sitting there potted and labelled, ready for you to take home.

I’d like to give my thanks to Åsa Gregers-Warg (who took my party round) and David Ward and all the friendly staff at Beth Chatto’s Gardens, and to Sue Tymon for faultless organisation.