​About 30 members of the Society came to the Sussex Prairie Garden on the morning of Friday 18 September. After a compelling introduction by an exuberant Pauline McBride we were able to wander freely, but observing social distancing, throughout the eight-acre garden, finishing with a picnic lunch at the garden coffee shop. After 1pm the garden was open to the public. 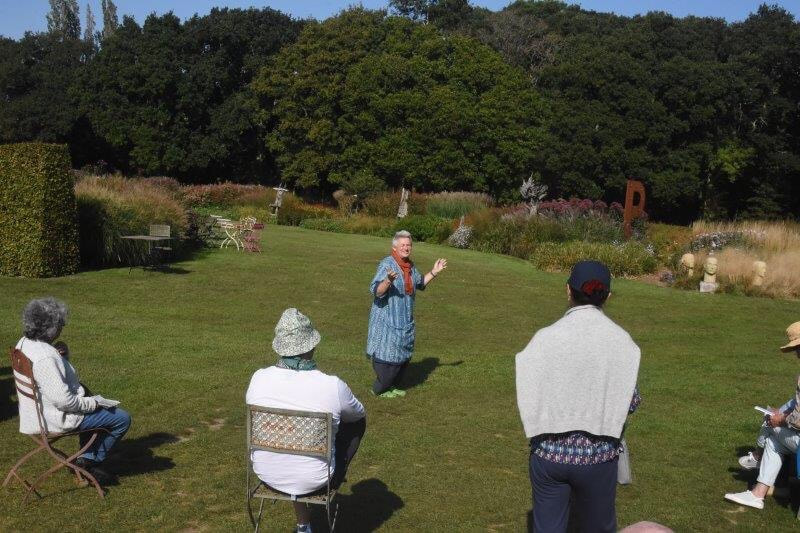 Pauline McBride giving introductory talk on the creation of the garden

Pauline and her husband Paul met each other abroad and worked together for 12 years in Luxembourg in the garden of a Swedish owner, including two years teamed up with the esteemed Dutch garden designer Piet Oudolf. They then decided to return to Britain to the small farm in West Sussex where Pauline was born and had grown up. Here in 2007 they began to create an innovative and beautiful prairie garden.

Prairie gardens are new, few and far between. Of only six listed by the RHS one is in Stoke-on-Trent and one in Germany. For many of us The Little House on the Prairie’ by Laura Ingalls Wilder was as much as we knew about prairies. They are wide open grasslands and here at Sussex Prairie Garden grasses constitute around 30 per cent of the planting, the matrix in which are planted perennial flowers that love the open space and the full sun.

The garden has a straight central axis planted with hornbeam hedges and orderly hornbeam trees. Outwith the axis the garden takes the form of spiral arms which are, according to Paul, based on the Fibonnaci numbers (1,1,2,3,5,8,13…..), a spiral form similar to but not the same as the Golden Spiral seen by some members on the visit to Theobald’s Farmhouse in 2019. Galaxies, such as our own Milky Way, are spirals and by association this brings a celestial aura to the Sussex Prairie Garden. The McBrides are building a tower so, before long, it will be possible to gaze down upon the garden from a heavenly viewpoint. 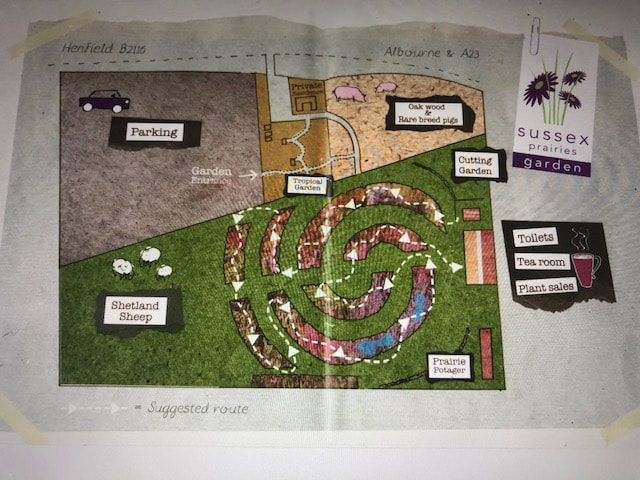 Map of the garden

​​There are wide areas of lawn turf beyond the spiral arms bringing a feeling of space on the outer edges of the garden – the wide open space of the prairie. Further away are large oak trees providing shelter.

​The soil of the garden is heavy clay but each arm of the spirals is raised and banked with a more friable mixture of mulch and compost.

​The McBrides have collected and planted very many species of grass and in late September the grasses were at their very best. On a warm sunny autumn day without a cloud from horizon to horizon they flickered and waved in the modest south westerly breeze with colours ranging from pale green and purple to numerous shades of gold. The planting of the flowers is in tight and often large clusters with a bold concentration of colour giving the garden a powerful impact. Pauline said that the best time for the flowers is July and August and then surprised us by telling us that in the cold of winter on dry days the plants are completely burned to grow afresh again in the spring. 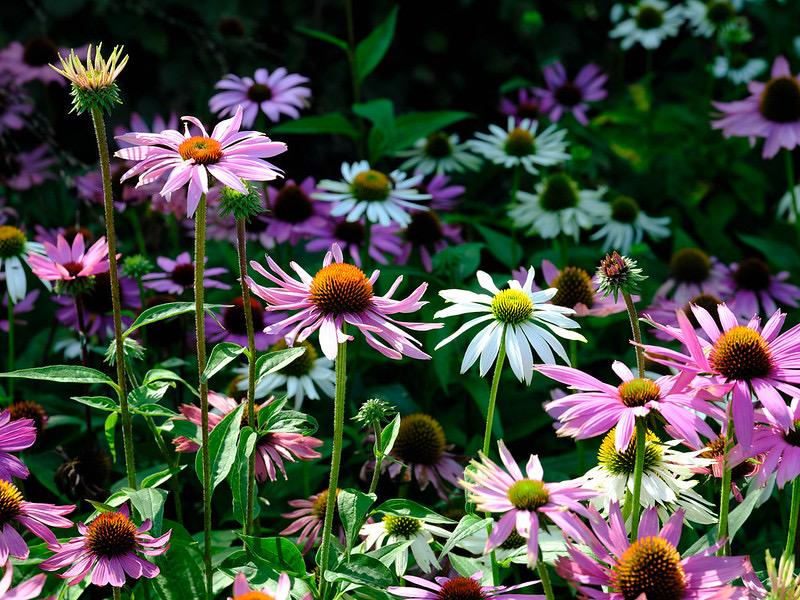 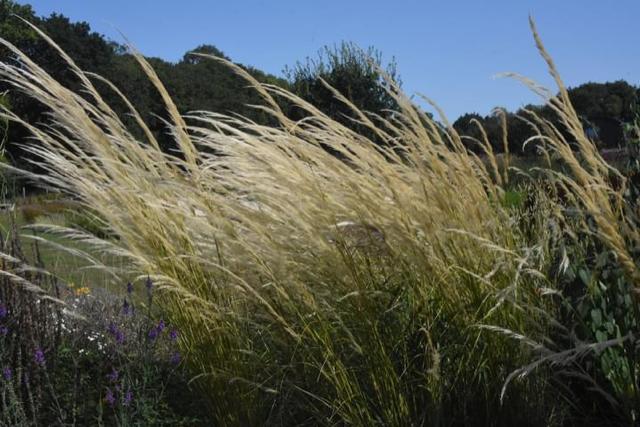 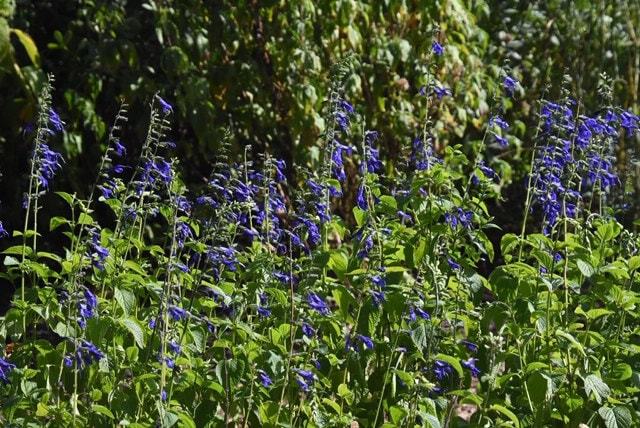 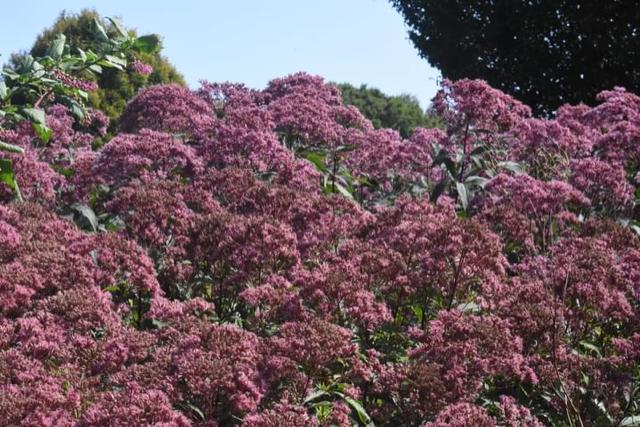 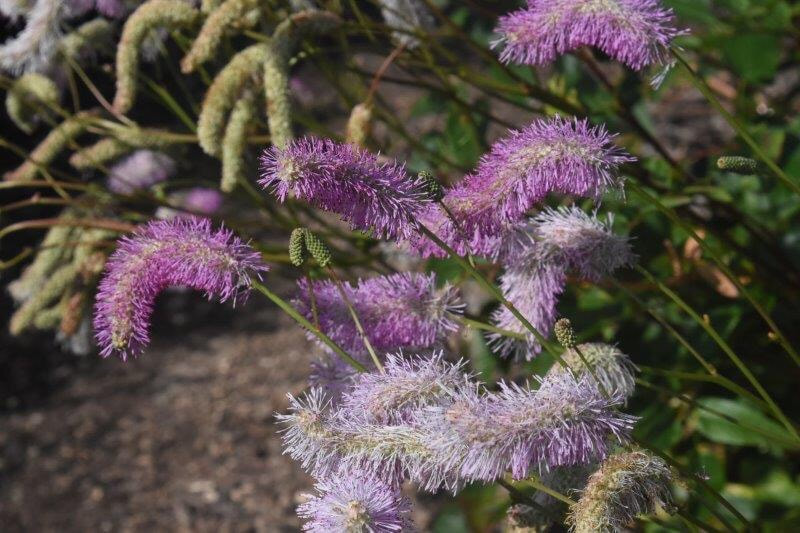 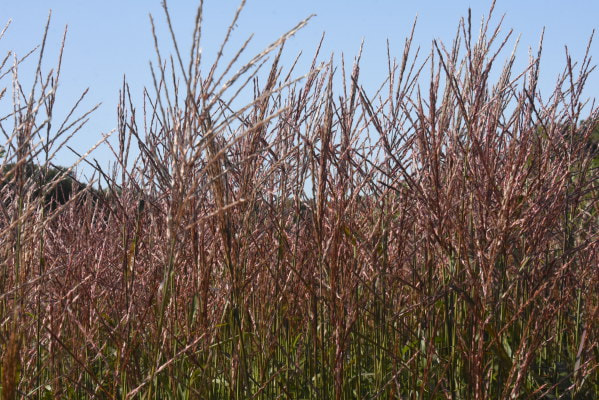 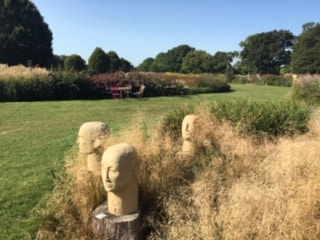 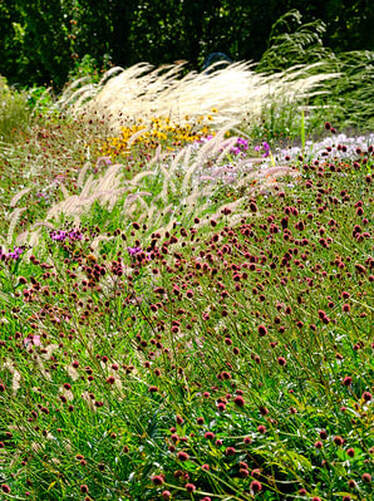 A swathe of prairie planting – grasses and perennials 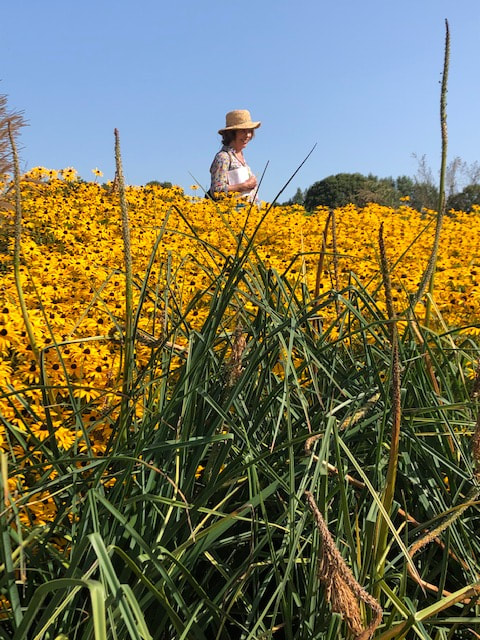 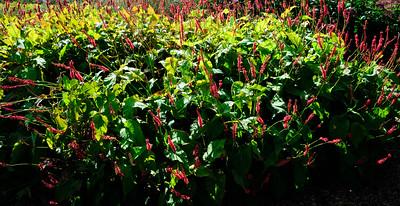 A small tropical garden is set beside the prairie garden and here there is a fine specimen of the oriental tree Toona sinensis.

It was a glorious autumn day in an unusual and beautiful garden. We thank not only Paul and Pauline McBride but also Sue Tymon for organising such a visit, enabling many of us to enjoy our first such outing since the beginning of the lockdown.