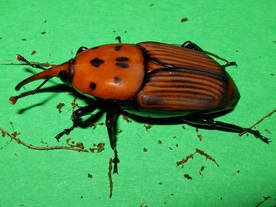 Over recent years, across the Mediterranean visitors can hardly have failed to notice the evidence of Rhynchophorus ferrugineus the Red Palm Weevil (female, left).  It is the largest weevil and one of the biggest beetles in Europe and one which kills palm trees

The red palm weevil is native to Asia and a serious pest of coconuts. The weevil spread to the Middle East in the 1980s after arriving in shipments of infected trees. From there, it rapidly spread west into northern Africa, devastating date plantations before first reaching Europe in Spain in 1994. In Italy since 2004, it ate its way through tens of thousands of palms in the beach resorts of Sicily, Sardinia and the Adriatic and decimated some of Rome’s historic parks. The pest, which has a life cycle of around four months, has also since spread to Greece, Cyprus, Turkey and France where it has wiped out all the Riviera palm trees synonymous with Nice’s Promenade des Anglais. The palm weevil is not simply a Mediterranean problem either: in 2016 a palm weevil infestation was found in an imported consignment of European fan palms in a nursery in Essex. There are now fears that the pest could become established in places like Torquay, Devon or central London, where the climate is mild.

The female weevil is a sort of armoured tank. She lays up to 300 eggs at a time and her larvae pierce the crown of the palm (or new shoots) and then eat their way from top to bottom. Global research is ongoing to try and find a way to find a solution. Meanwhile, we must learn to live with it.

Prevention is essential since the weevil is an excellent flyer which can cover large distances. It is a discreet enemy and almost always deadly.
The preventive methods essential to recommend are: 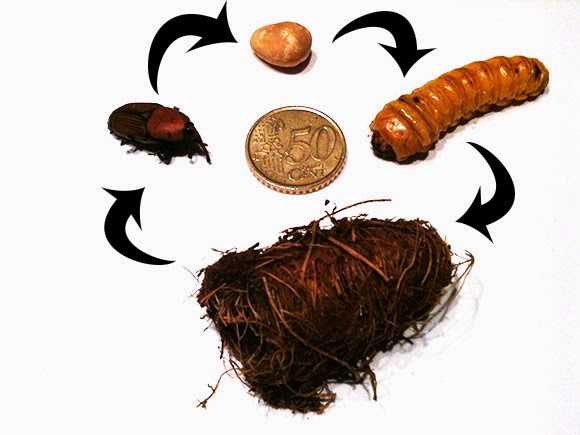 Ask for confirmation from a specialist if available (other larvae like the Cetonia aurataor or common rose chafer may be confused with the killers). You must act quickly, check your adult palm trees with binoculars, watch out for sawdust at the foot of the tree.  Treat with a systemic insecticide – water the crown with “Confidor” every 30 days in the late summer. You must be sure to remove flowers and fruit before treating as systemic insecticides kill bees, and bees are adore Phoenix flowers.

It is also prudent to use systemic insecticide (after removal of flowers and fruit) if there is a palm showing visible signs of attack in the neighbourhood. The larvae can take up to two years to kill a palm tree, generations of larvae develop into adults 2 to 4 times per year). The number of adult insects that will hatch and survive to attack other palms is between 25 and 100 per generation.

Preventive organic treatments (nematodes, bacilius thuragiencis, Beauvais bassiana)  are not really economically viable, and the nematodes tend to pollute swimming pools. Eygpt and Saudi Arabia have published research on preventive or curative treatments with plant extracts including jojoba oil. They have tested many species of plant-based insecticides. For the moment we have not found any plant based treatments that are sufficiently inexpensive as they have to be applied often and for the lifespan of the palm tree.

Traps don’t seem to work and there are no known repellents that work.
In summary, most preventive techniques currently available require a  difficult implementation that in many cases do not work.

Some palm trees are at a higher risk: