​This again is a private garden designed by its owners. Alan Gray and Graham Robeson bought the house and surrounding 2.5 acres in 1973 and moved in in the early 1980s. Since then more and more land has been acquired, now totalling 32 acres. The house was built in 1913 and was originally surrounded by small parcels of farmland. These were the inspiration for the garden’s development from 13 small fields to the complex of different areas each sheltered from the others. As Alan said “It just grew like Topsy”. 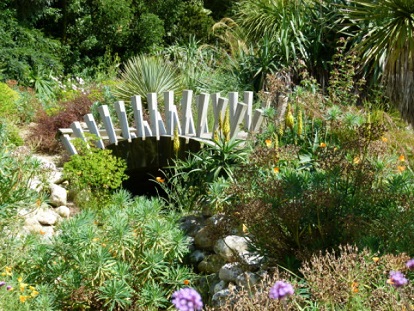 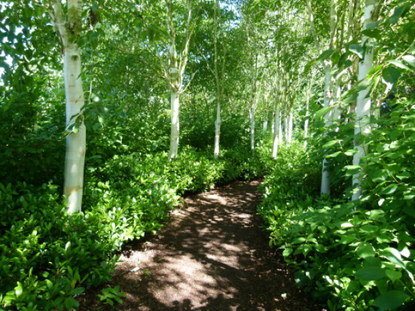 ​The key idea underpinning the design of the garden is to make visitors want to explore, to see around the next corner. So the garden is full of different areas with arches and pathways, vistas and blocking hedges, glimpses of new sections and also views to the outer world. Proximity to the sea ensures it is milder than most of East Anglia and, being in an area with the lowest rainfall in the UK, several Mediterranean and other interesting species can be grown. 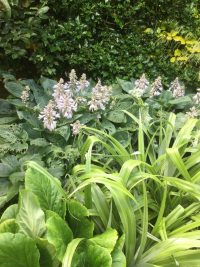 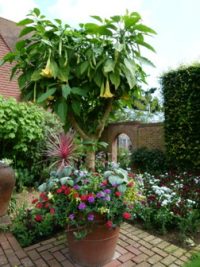 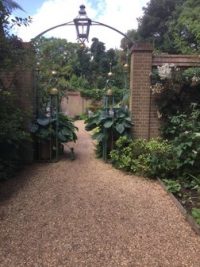 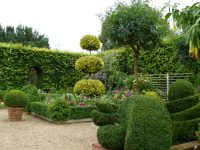 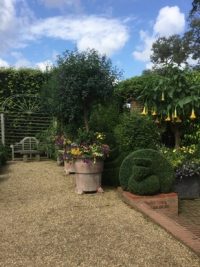 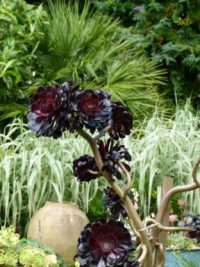 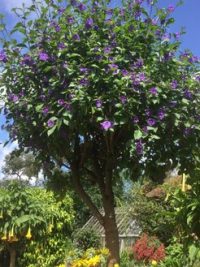 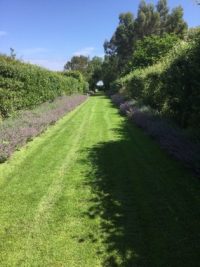 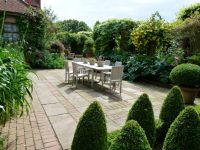 There are some lovely areas and ideas. I especially liked one of the longer vistas lined with Nepeta and espaliered apple trees and some of the flowering topiary. Plants are rarely labelled but Alan gave us permission to pick a small leaf or flower to take to him for identification. As someone who can fail to remember even common plant names this impressed me enormously. I duly took a sample to him which he told me was Mexican Tree Spinach (Chenopodium giganteum) – very striking and also edible I discovered when I looked it up.
East Ruston Old Vicarage is again a very personal garden though not what I would call a domestic one like Thorpland Hall. It has lots of fascinating aspects but it felt more of a public than a homely space.

​We ended the morning with a delicious, elegantly presented lunch provided in the restaurant. A fitting end to an enjoyable morning.

​The last garden of the day was also private. The owner Harry Buxton welcomed us and gave us a short introduction to the history of the house and garden. The house was finished in 1812 and its design is attributed to Humphry Repton and his son John Adey Repton, although as Harry explained, that did not mean they did the work. Rather they produced plans and the owner used his own team to do the actual work. Since then the house and garden, while basically retaining their original character have been developed and changed by successive owners. Harry’s parents especially had done a lot during the 1960s. However the glasshouses and trees are still mainly Repton. 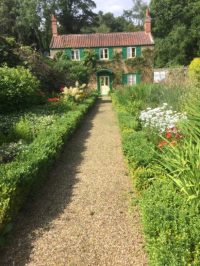 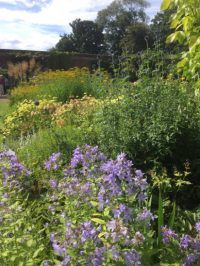 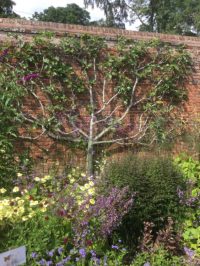 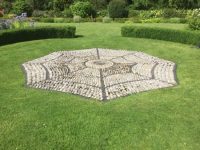 The garden has several distinct sections. There is the original walled garden, extended early last century, now known as the Spider Garden due to the design of the gate made by the local blacksmith and a cobbled area in the centre designed to mimic a web. These walled areas include lovely herbaceous borders, with clear blocks of colour but all coming together. I found them very pleasing, less formal than some at Felbrigg, more organised than at Dale Farm. There is also a water garden with a lake fed by the River Ash and considerable wooded areas including vast numbers of rhododendrons, a heritage orchard and arboretum. Altogether the garden area totals 80 acres with the rest of the estate being farmed. 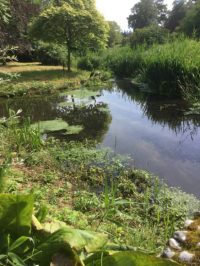 The glasshouse was originally built before 1840 and is a rare example of the early use of high quality cast iron and wrought iron in non-domestic buildings. In the 19th century it would have been used to grow grape vines, it now houses head gardener Stewart Wright’s collection of pelargoniums. It is Grade 2 listed, recently restored by English Heritage.

This again is a family garden. What is also nice is the emphasis on sharing it with others and making it available for visits like ours and for events such as weddings.

Next day
Back to overview
Page load link
Go to Top